The revamp of the ignition and cleaning of the tank got it back on the road. The tank came out better than I expected. With a bit more work I could coat it and use it. After soaking in my mixture for a couple of days, draining then letting it sit outside for a couple of almost 100* days the remaining gunk balled up and was able to be vacuumed from the tank.

Other than the lifter it runs fairly well. Could use a carb tweak here and there but not bad for spraying with carb cleaner after 11 years and cleaning out the fuel system. Refurbed the accelerator linkage with new parts as well as the kick down. Got the Mannel engine book for the historical perspective to get it back to having the correct parts.

Started collecting original parts for the A/C. Can’t really enjoy a car too much in the summer here without A/C. Rather than put a Classic Air or like system in I’ve decided to get the stock parts and refurb them or get repros. I’ve got the entire blower assembly. Works great, a little worn looking but after 50 plus year not too bad considering. Just like it’s owner. Next will be the hunt for the heater box/evaporator assembly then the condenser and pump. A/C won’t be done for this summer. Too much basic mechanical for reliability before I start that.

The initial plan was to get the brakes working well enough to get on the road. Once I got into it and saw that it didn’t have the correct master cylinder for manual drum/drum and the condition of some of the lines and the pressure differential I’ve made another “while I’m here” decisions. It’s also the first “wow those are hard to get and expensive” moments. The pressure differential switch was broken off. It’s the 67 single pin switch. Looks like that’s the only year they used that particular switch. NOS is $125 and reconditioned is $45. If you can find them. I’ve found one of each. The manifold/distribution block for the pressure differential switch needs a rebuild as well. Those parts are easy to find, two seals and a crush washer. The piston is stuck toward the inside. I’m going to make an air fitting and plug the other holes and see if I can blow it out. It’s soaking in Berryman’s right now trying to loosen it up. Otherwise it’s drill a hole, use a pin punch to get it out and fill the hole by TIG welding the brass and resurfacing that side of the manifold.

Not the right master cylinder… 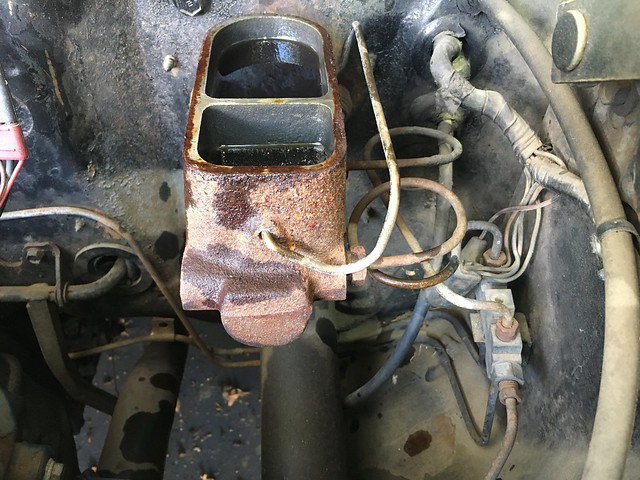 Got a choice of air cleaner assemblies. The standard corporate blue and another that’s gold with a 289 4v sticker. I’m not sure the gold one is a 67, looks like it could be more like a 65 with a repro decal. My understanding is that after 65 the engine colors were standardized. Either way I’ll get the one that fits the year and paint it the appropriate color. The gold one has a new air filter and either a repro or NOS breather with the decal stashed inside the assembly. 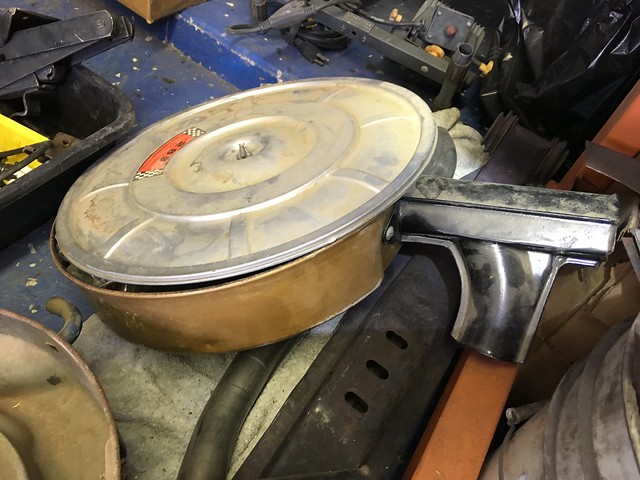 Brakes don’t look too bad. Rears look better. Looks like newish hardware, shoes are good, the movement of the mechanicals are good, seals on the wheel cylinder look good, no leaks. It stopped but way soft pedal. I could lock them but the pedal was almost to the floor. The fluid looked like Coca-Cola but sure didn’t taste like it… 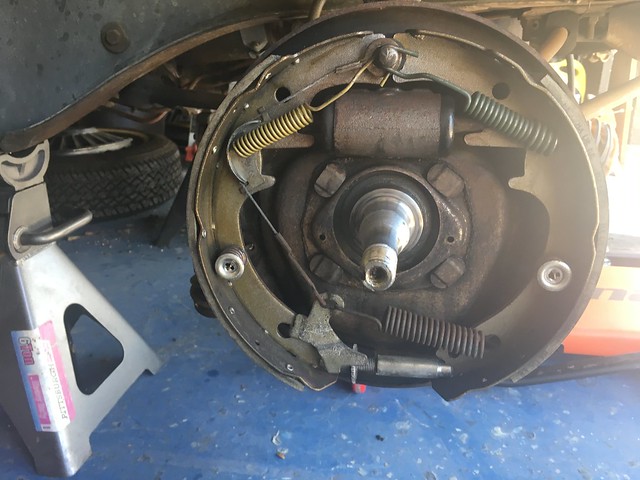 The front drums had rust in what looked like either water collecting or it was up that far in snow each winter for a decade. It was in a garage that was more like a carport to conform to the association’s rules. It was in the sticks but they still had an HOA. Based on some of the other rust at that level particularly the front valence that it sat in snow for a while. Each year. I used some Scotchbrite to see if the worst of it was pitted too bad to turn. It wasn’t bad. My engine machine shop doesn’t do brake drums/rotors and recommended the local driveline/rear end shop. Didn’t know they did brakes. They did a fantastic job, $39 for both. 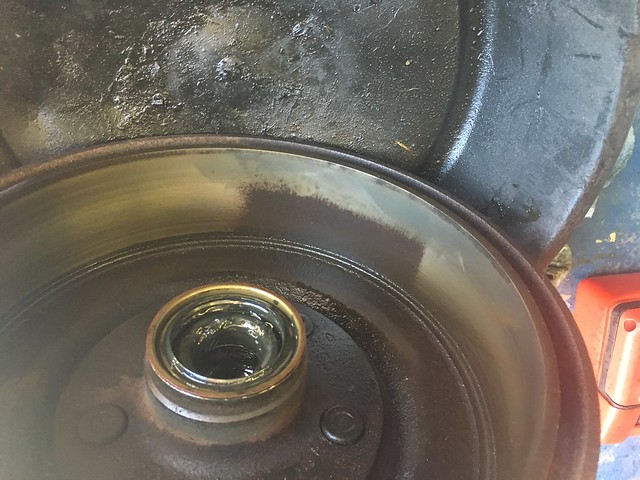 I’ve started refurbing the lines (should have the other parts in a few days). I use Scotchbrite bristle Roloc on a 90* air die grinder to knock the big hunks off. Then I use Scotchbrite maroon and brake clean to finish it off. The insides are blown clean with my tank gunk mix and air. I check the pressure to make sure it’s not clogged by putting 10 psi into the line and reading what comes out the other end. 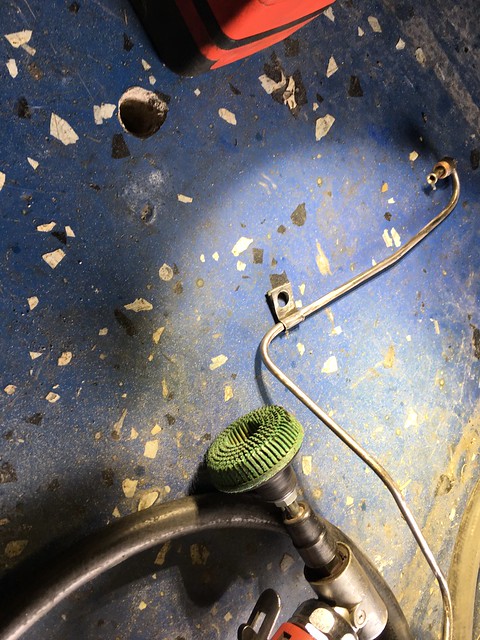 Old school meets new school. I’ve been using a computer in the shop for the last 8-9 years. The last two builds I did and the daily I service didn’t/don’t have paper manuals at all. 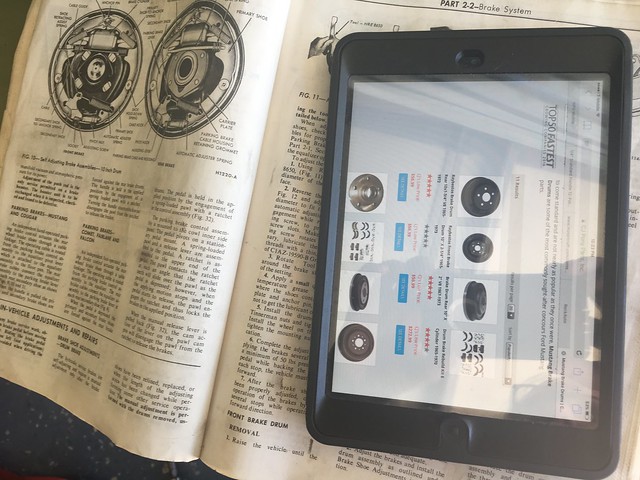 Here’s what the front suspension looks like now. After brakes it will be the steering. I’ll drive it enough to get it registered then start in on the front suspension refurb. It will be a big one. Ball joints, bushings, knocking the gack off. I’m going to do my own roller spring perches. That’s the kind of thing we do on race builds. I’ll do the Arning drop and get a 1″ bar. Other than that I won’t do too much except for shocks.