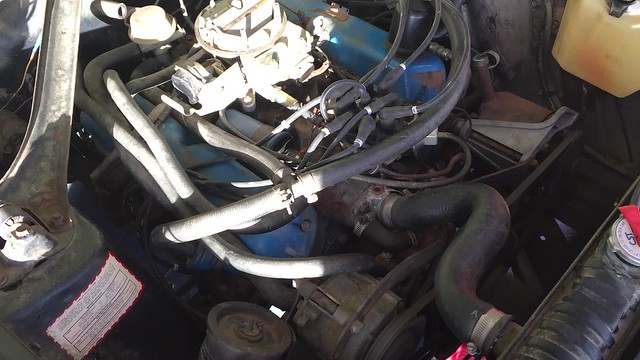 Running from a gas can. Needed a battery, wires, coil, plugs, points, condenser, cap and rotor. I didn’t want to wait for the Pertronix so I went old school. I grew up on carbs and vac advance distributors. Initially I did plugs and wires. The plugs were pretty carboned and the field mice got to the wires. No spark though. Coil tested fine and I didn’t want to test the secondary parts so I just did a “parts dart” on the rest of it. The points looked to have been rusted together and all the other parts are consumables anyway. After that it fired right up. I was turning on the key so I could hook up the remote starter and see if I had spark and I pushed a bit to far and it caught and fired right up. I wasn’t expecting it to fire but it did.

I prefer NAPA for OEM type replacement parts rather than one of the other chains. I do have a 24 hour Autozone about a mile away for the late night sessions. I got an Exide 24FX at Home Depot to save me the drive to Pahrump thanks to a tip in another thread. Eventually I’ll get one of those fake Autolite tops and decals to give it that period feel. A new NPD generic sender/pickup is on the way. Tank will be good enough to use but will get replaced once I get everything up and running. It’s clean enough to use now but has some aggressive rust in the upper corners of fill side of the tank. It’s going to need to be coated so I’ll just replace it a bit down the line.