Uncle! It’s getting too hot to get a lot done in the shop (my wife still calls it our garage) to do much work for long periods without coming in to cool off. Ironic for working on the cooling system. I’ll probably want to get one of those magnetic usb/battery powered fan/clock/thermometer off the truck to use in addition to the big fan and a porta cool. The alternative is not to work on the car(s) and that’s not going to happen. With that I decided to ditch the whole thing, get a high flow water pump, yuuge 40 gallon radiator, 10″ hoses, 2 x 4000 CFM fans and coolant made from unobtainium so I could cool my stock 200 hp engine. Naw, not really…

Done. Works well, car still runs well. It’s got some leaks. Each end of the top and bottom radiator hoses leak. Imagine that, near 20 year old rubber hoses that sat for 11 years then had corrosive back flush solution run through them have started to leak. Who’d a thunk? I was originally going to order the hoses with the rest of the parts for the refurb but thought if there was a chance I was going to have to tear the whole thing down right now anyway I didn’t exactly need new radiator hoses. And I’ll need to the get the original style clamps to be period correct. And the radiator drain seal has failed and it leaks too. I’d say that’s pretty minor in the big picture, as long as I get them fixed and not really drive it until then.

When you’re replacing classic or even older parts with current replacement parts there are bound to be some differences. We see this in the production cars that are converted to race cars/trucks and pre runners. In those cases there isn’t the mandate to maintain a period correct vehicle and many of those parts are modified, fabricated or from other like uses in that make.

The lower cost generic thermostat housing/outlet is the same Four Seasons aftermarket that Rock Auto sells. It’s also thicker at the mounting boss/bolt hole than the original or the 87 Ford part that was on the car. 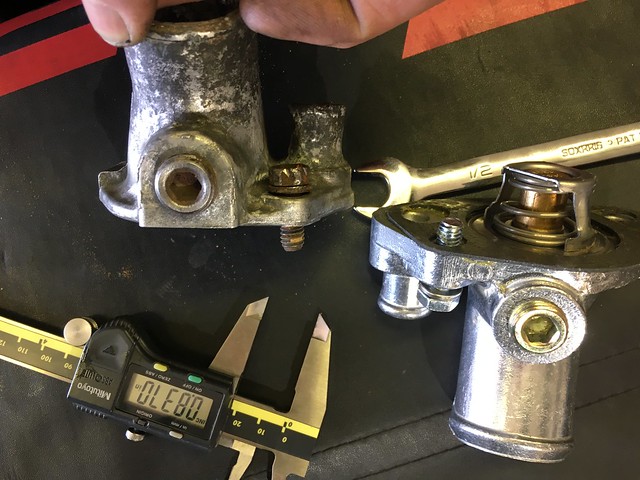 With the wear, previous leaks and rust the existing bolts that came off the part and the new bolts I replaced them with weren’t long enough to catch enough threads. The originals were too hammered to use again anyway. The one that didn’t have the rounded head was caked with corrosion and hardened rust. IOW metallurgy happened. 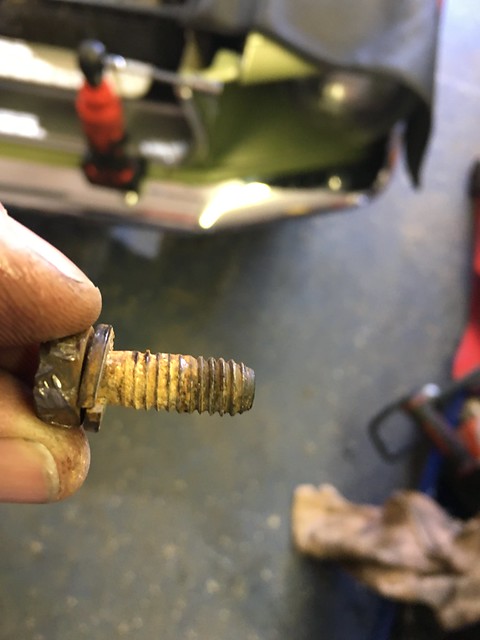 To get a match that would work on the new part for the bolt length the replacements are going to need to go another 1/4″ or so into the manifold thread. The hole is plenty deep it just won’t allow the threads to run down that far. I only chased them to about what I needed for the shorter bolts. Now I have to chase the rest. I use a cutting tap for this because it’s hardened and corroded. In fact I rarely use a chaser and have never had any issues damaging existing threads. A chaser also won’t recut a stripped start of a tapped hole. Here’s what I pulled out of the top hole. 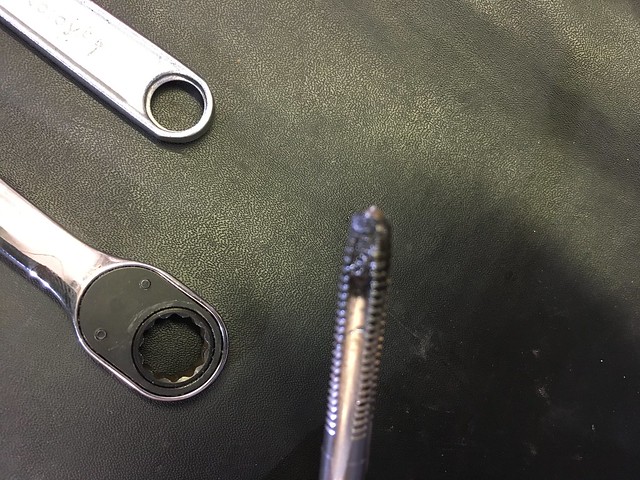 The bottom hole is harder to get to. Since the entry wasn’t stripped I could use a bolt. The chaser I have for that size is too long. I chased them when the manifold was off so clearance wasn’t an issue. I used Rapid Tap and ran the bolt in and out using a ratcheting combination wrench then blowing the gunk out of it. 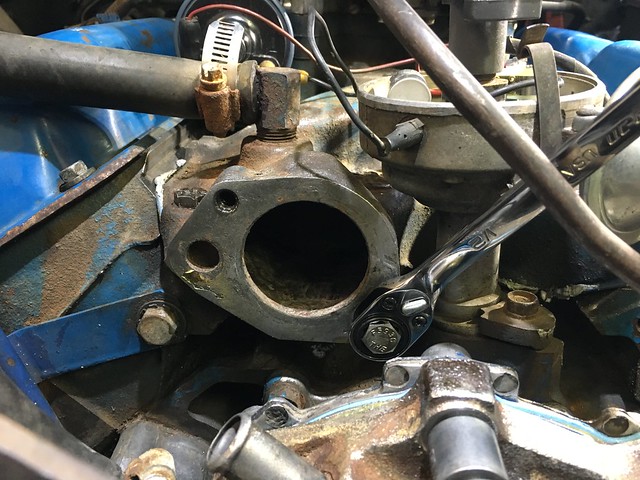 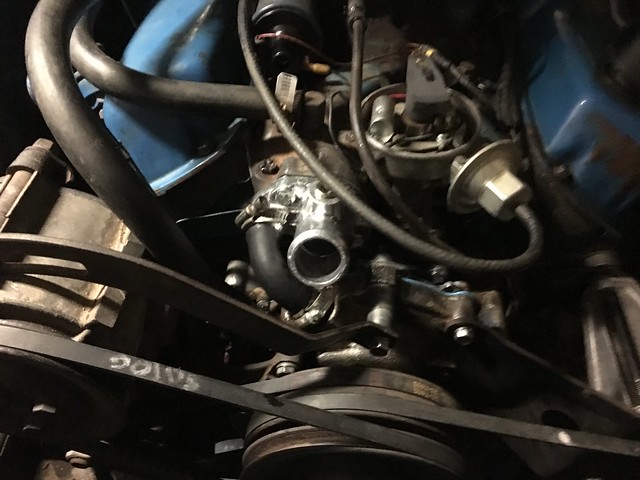 If you are doing big engines or are a pro shop you’re likely using a pressure filler so you don’t get air pockets in the cooling system during a fill. I don’t do it enough to justify it though when I was racing the water/water wetter came out after every race, sometimes during an event we had to do it to work on the engine or during tech. These days not so much. You can “burp” the air from your cooling system on fill using a jack.

How I do it is jack the car up, radiator cap removed so the filler neck is the highest point of the cooling system. 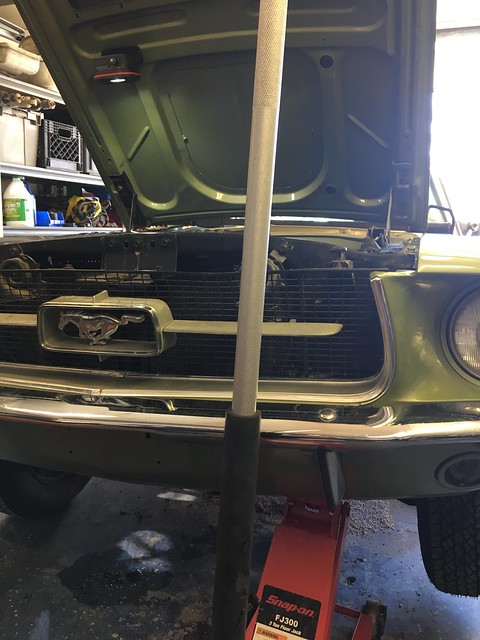 I top up the system with water only until I know there are no leaks either inside or outside the engine. I start the car and let it run for a few minutes. During the run I add water as it lowers in the radiator. When the radiator no longer needs water I watch it and can see air releasing from the system. Don’t let it run too much longer than you need to release the air or I will start to run over as it gets hotter. At that point I cap it, drop the jack, check for leaks then do a road test. After the test I make sure the water is still more or less topped up. If it’s not it means there is either a leak, you didn’t get all the air out and had a larger pocket or it’s leaking into the engine. You can check to see if it’s leaking into the oil by reading the dip stick and looking for that blueish sheen in the oil or in the radiator. If so you’re going to need to figure out where it’s coming from because it can tank your engine.

After I got a mile or so on it I brought it back in for some thermal images. Remember from the last time the images showed massive heat at the thermostat housing/outlet. It looks better this time, not as much heat trapped at the base of the housing. That’s in an ambient temp over 110* F. When you look at the contrast as well it doesn’t seem to be as much heat soak into parts around the cooling system. 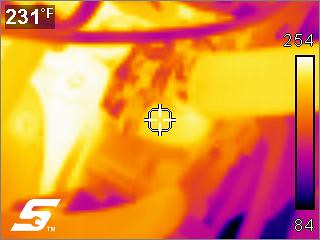 Except for some leaky hoses mission accomplished. Other than the hoses the next thing will be the power steering rebuild and suspension refresh.