Was hoping to leak down today but…

My HF leak down kit has no adapter for the olde tyme plugs. (that would be 18 mm for those keeping score) It’s not a bad kit, available and affordable. It can only take about 15 psi before the leak down gauge freaks out. The good ones can do 100 psi. They are also quite a bit more money. I did the Miata and Ranger with this one and it worked fine. Because 14 mm plugs. I did at least one of the hobby stocks with one I borrowed from the truck at the time which was eons ago. 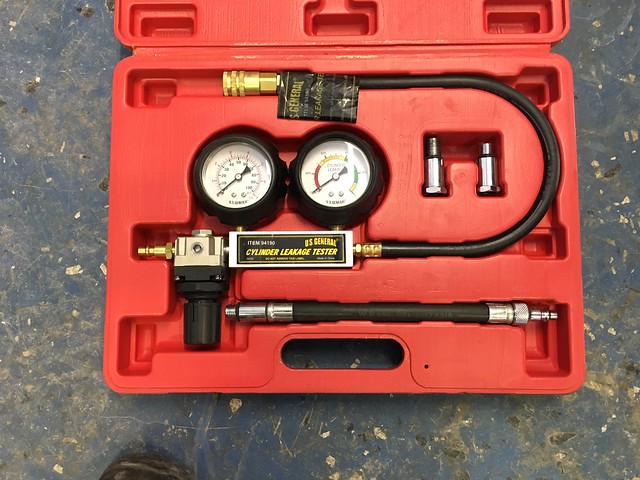 No adapter so I start calling and looking. Nothing on the truck, he can order but knows the thread size on the HF hose isn’t the same as the SO hose so that will require hose and adapter. Maybe and air fitting as well. And he doesn’t have one on the truck to borrow. Amazon yes. Three piece, under $15 two day shipping. NAPA, no. Chain parts stores don’t have one to loan.

I think I’ll make one out of a spark plug. I don’t want to butcher one of my new ones. I dig through one of the trash cans in the shop to find the old rusty plugs that were in the car. 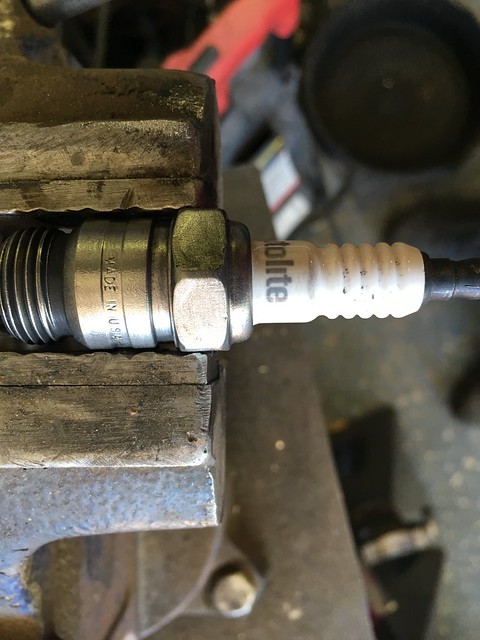 Gonna need to cut that neck off to get the porcelain out. Hopefully I’ll be able to cut some 14mm threads in the plug carcass. I’ll use Mr. 3″ cut off wheel. One of my go to tools for this kind of thing. 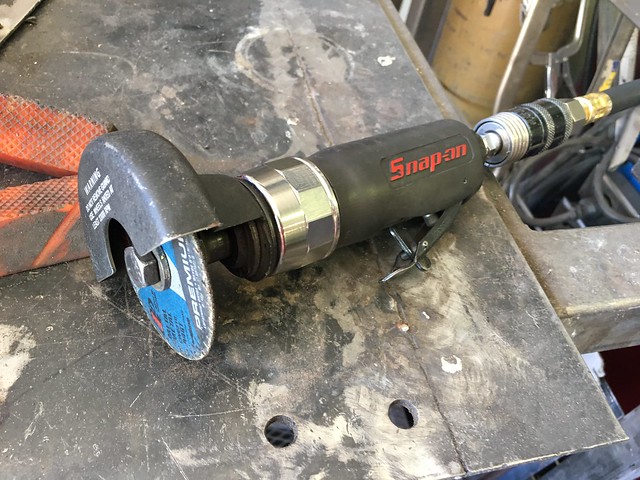 If you don’t have a compressor or much of a need for a specific cut off tool I recommend an electric angle grinder. Having one is a must have for any toolbox. It’s versatile, can cut, grind, brush, sand. Those that fab all the time have at least four to six each with a different wheel so you don’t have to change or different sizes and the like. I’ve had this Dewalt for 8-10 years, rebuilt once. I’ve got about half dozen angle grinders of various sizes, mostly this kind of Dewalt. The HF grinders, even the older one’s work well. I had one for a few years using it regularly until it burned up. The new ones are supposed to be pretty good. 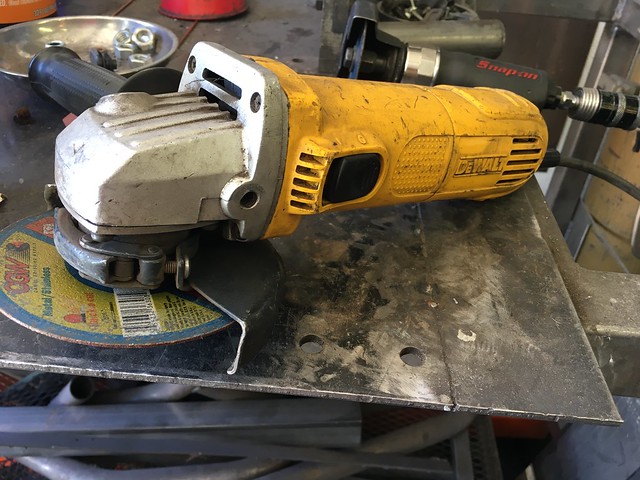 Shoulder removed and ready to separate. 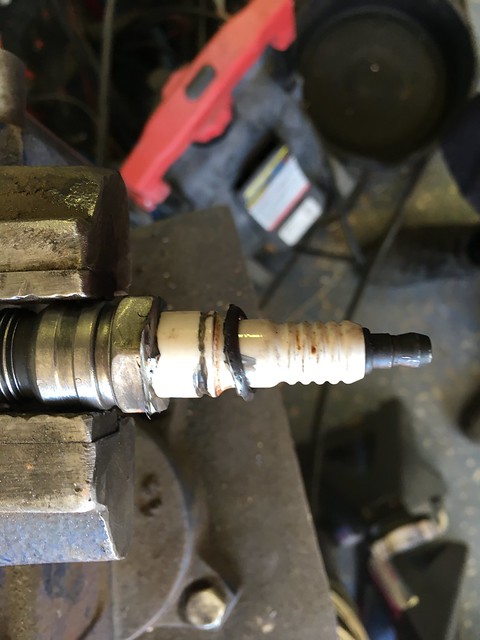 Just pull it out. Grind the electrode contact off and we have a core. 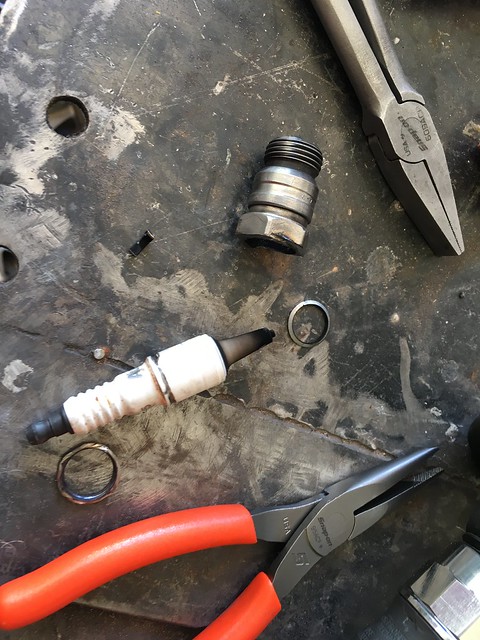 No joy for threading another adapter or even general air fitting. So what to do? Weld in the smaller adapter in the kit I’ve never used. First I need to grind the chrome off the part. It’s hard to weld and the fumes are hazardous. Then I need to clean up the plug fitting so they’ll cleanly weld. 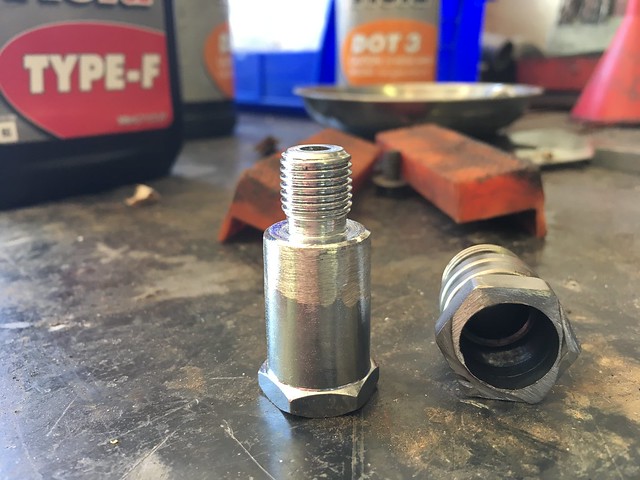 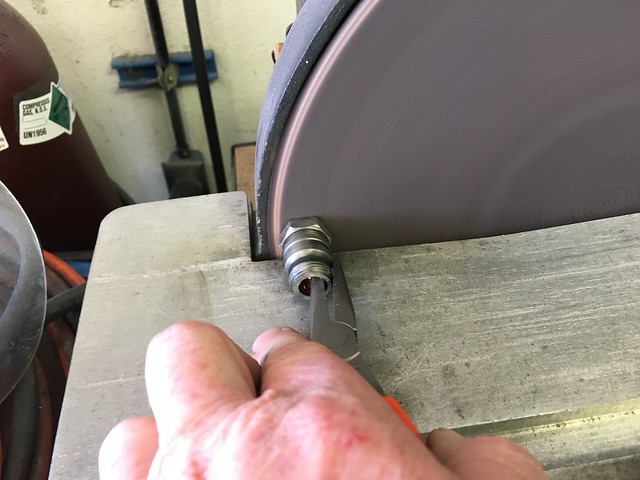 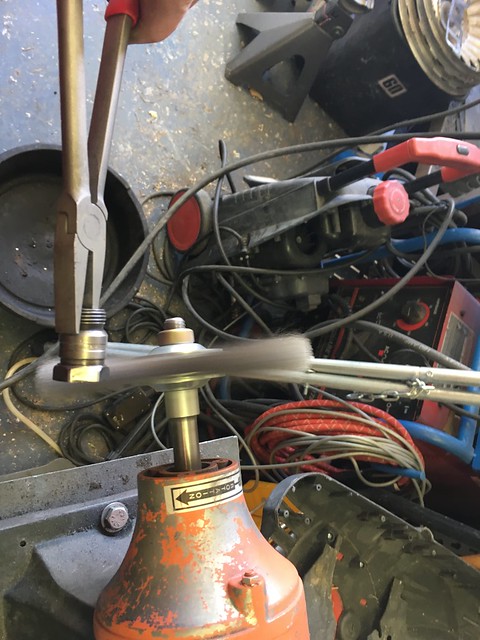 It’s cleaned up, washed with acetone and ready to be fixtured. 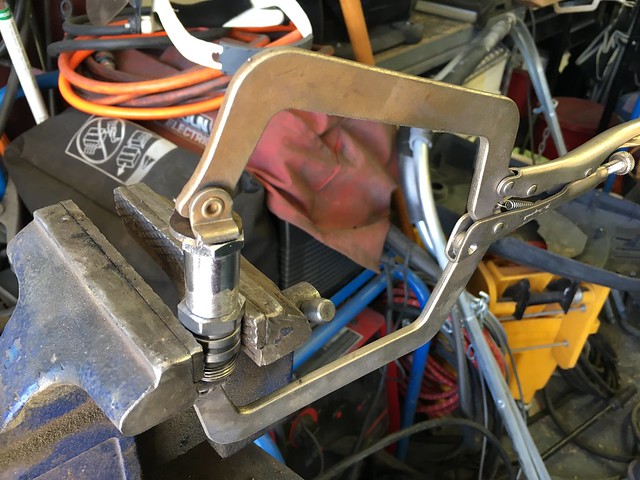 I’ll weld this one using the TIG process. Need to prep a tungsten, I use gold for this (1.5% lanthanated) and ER70S2 filler because that’s what I had in front of me, argon and DC- at 125 amps. 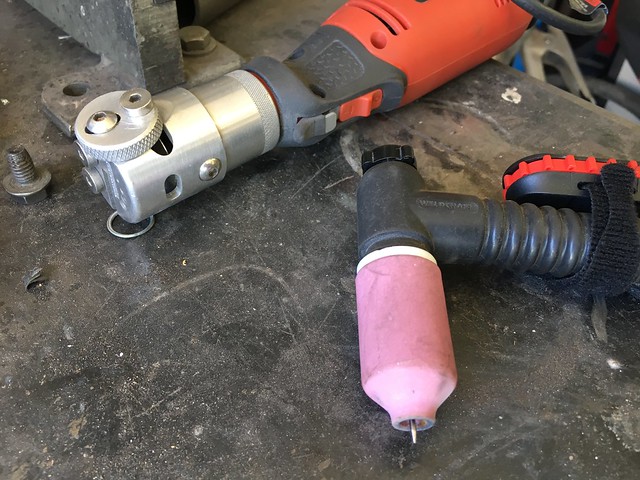 Tack it all four sides before the finish pass. That’s a standard way to join tubing. 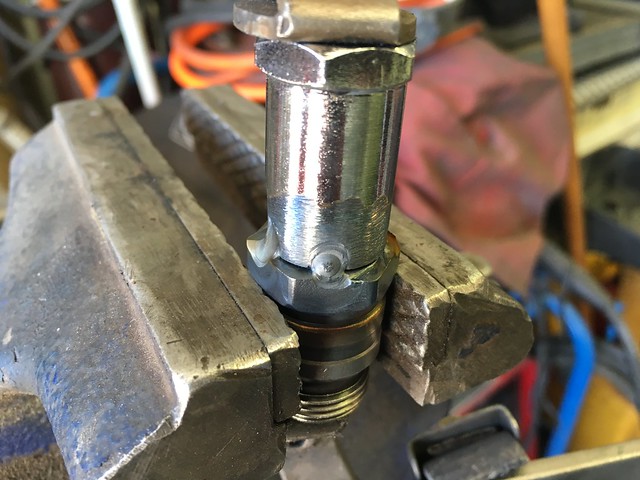 Now for the finish pass. Not my best work. The small diameter and the thick wall tested my ability on this one. Not the cleanest but it will work. 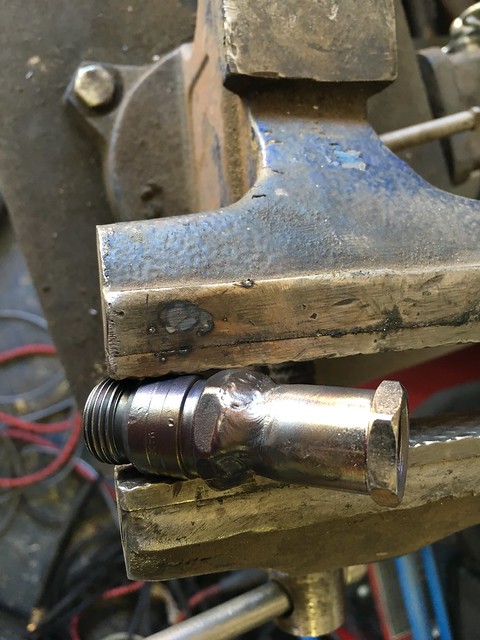 I now have an adapter but I’m out of time in the shop today. Had to skeedaddle to my day gig.

I’ll get to the leak down tomorrow and hopefully finish before my cooling system parts get here.