It’s been a long wait.  Too long.  My killer deal of a vise fell by the wayside.  Amazon updated the deliver time to right about now, or more than two weeks from when it was originally due.  That meant I had to go buy a vise locally (and pay retail).  It was a similar promotion/package for a Wilton vise but not the bullet style.  Bummer.  But I needed a vise so I could get back to finishing the car.  I got the free hammer and a different funky color but the vise was a Chinese made Wilton 6 1/2″ utility vise.  It’s a nice vise.  But it ain’t a bullet. 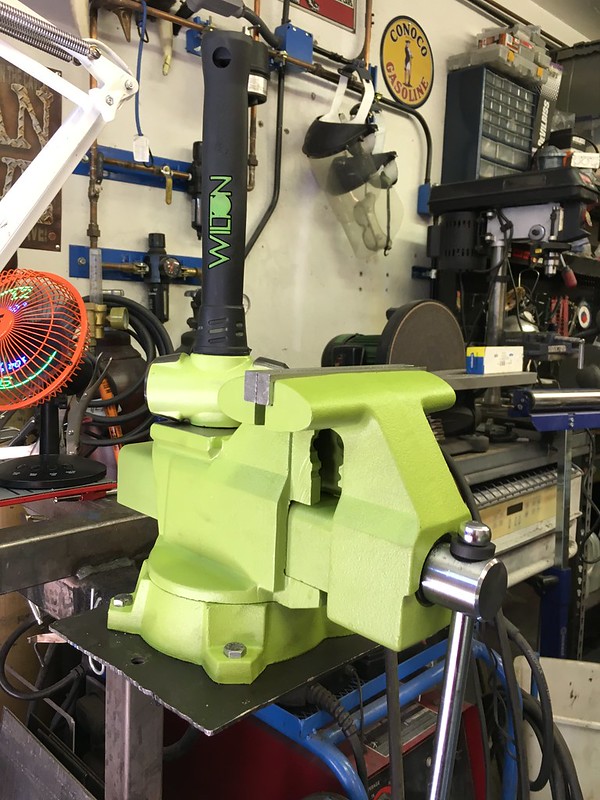 With that in hand, or rather on bench it’s time to get the steering sorted.  I’m doing this refurb getting what parts I need and not so much getting getting complete kits.  I source quality aftermarket parts, say seals and gaskets from Gates and various other bits I need from someone like C&G Ford Parts.  I like C&G.  As long as you know what you need it’s easy to get it from them.  One thing you pay for from the restoration suppliers is the knowledge that you’re getting a kit that is compatible with your car.  You don’t need to know the part numbers.  If you know the part numbers and know what parts you’ll need after you crack the cores open you can save some dough.

With all the parts off the car (for some time now) we start with the power steering pump.  It was a leaker.  The housing was covered in old, hardened gunk.  Power steering/ATF I’d imagine.  Looked like the front and rear seals were leaking fresh.  First things first you gotta crack the pulley off the shaft.  If you use a traditional gear puller on to the pulley it’ll fold quicker than a Manhattan developer with a gold toilet at a negotiation.   I picked up a used tool truck brand puller on evilbay for cheap.  Off like butter.  Should go back on the same way. 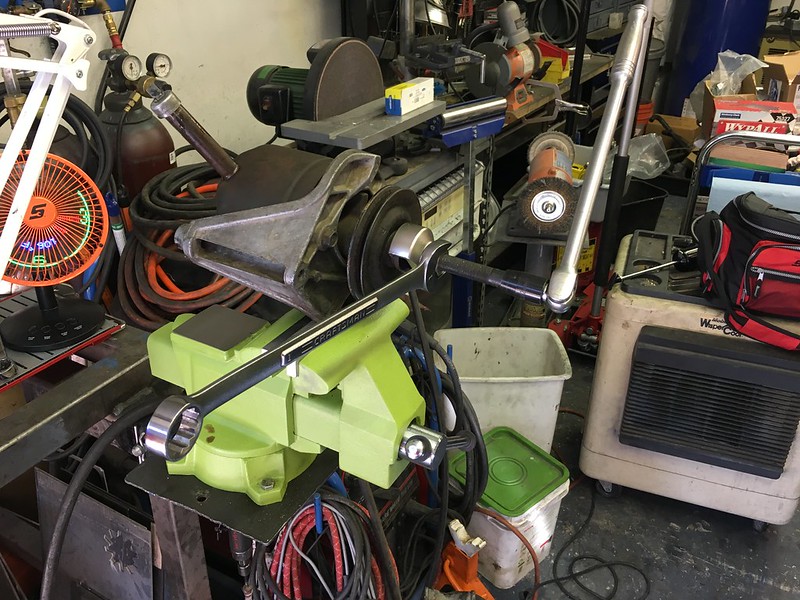 Time to crack this bad boy open and pull him apart.  The rebuild on this will be seals, a gasket and making sure the parts inside aren’t too badly scored.  Then I’ll blast 50 years of kack off it and paint it with NPD Ford Teal power steering pump paint.  For the seal kit I used a Gates 351200 from Rock Auto. 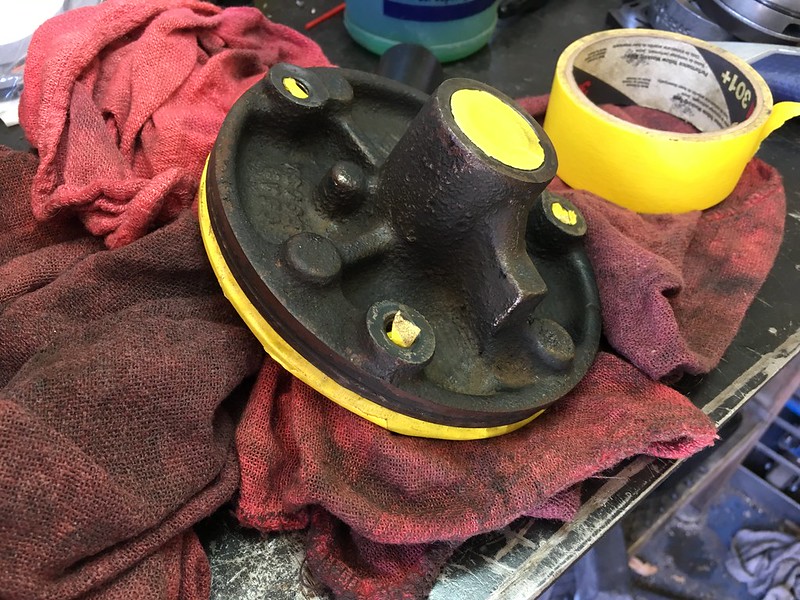 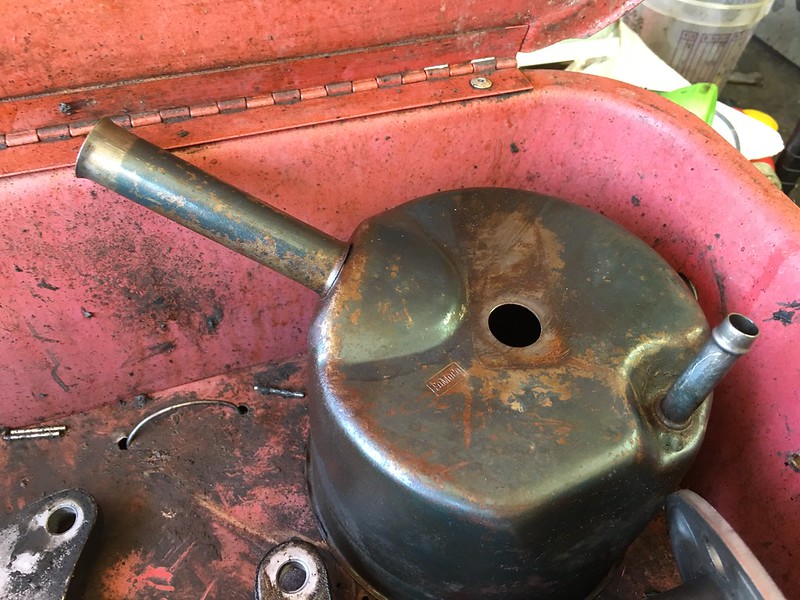 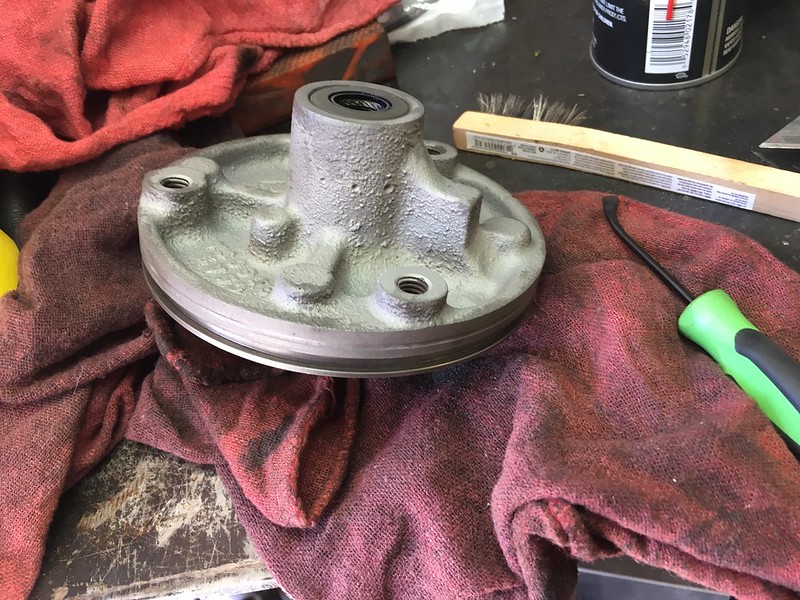 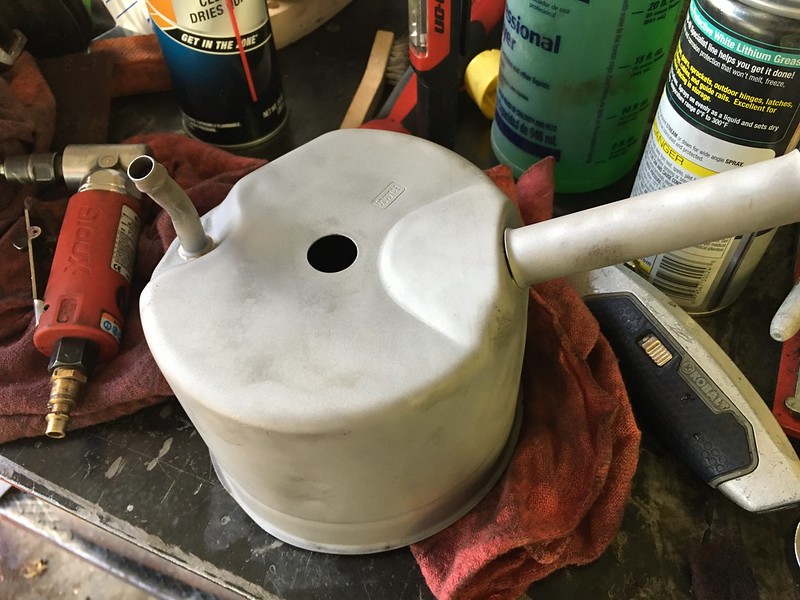 It’s not a difficult rebuild.  If you’ve done brakes you’ll be OK doing this.  Fit really counts on this.  Just like powertrain internals or brakes.  One of the dowels that hold the pump slipper assembly in place was bent.  Have no idea how that happened but there were some dents on the housing.  Perhaps sometime in a previous life it was dropped.  Need to straighten that out. 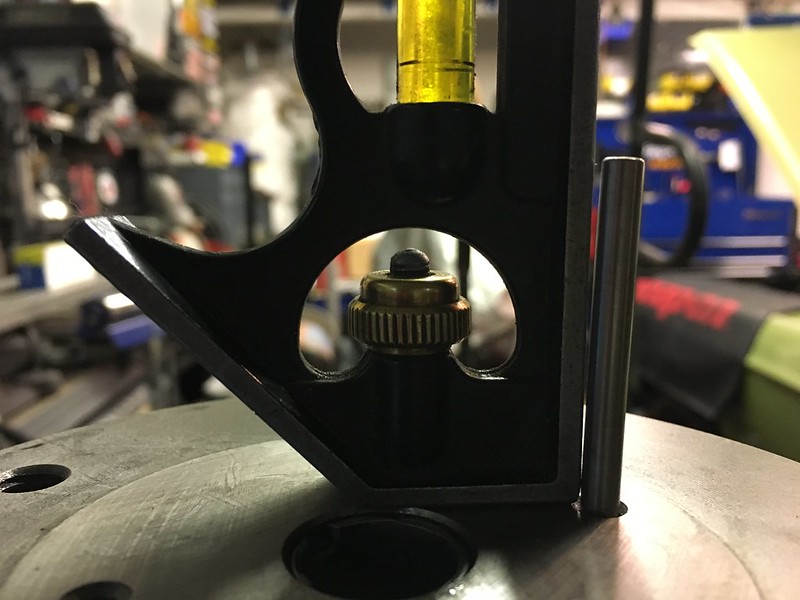 Here’s the pre refurb shot of the pump slipper assembly.  It’s a bit scored but nothing that won’t buff or Scotchbrite out.  Pay attention to the slipper orientation.  It matters.  The middle gear ring is good.  There are no chips in the slippers or rotor.  Seems to be in round, no run out as near as I can tell by looking at it.  Springs are in good shape.  Same with the other internals.  They cleaned up well but I don’t have a shot of that. 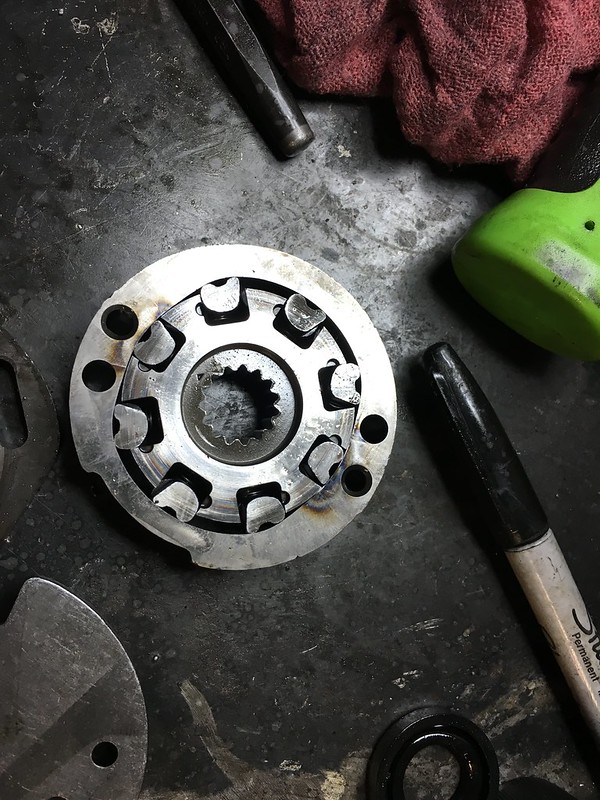 It goes back together the same way it comes out.  I replaced the seals and as I was getting ready to do final assembly I noticed something hanging out the side. 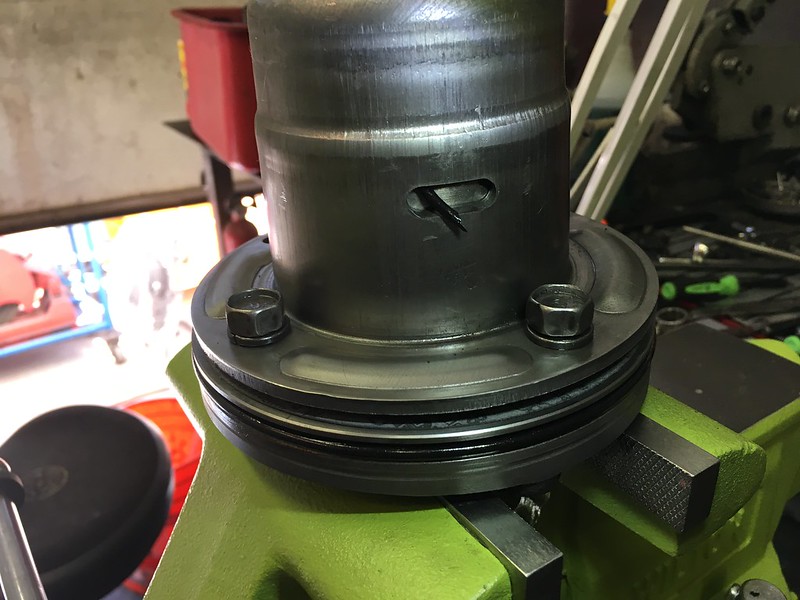 Damn it!  Didn’t use enough ATF to lube that seal.  That’s easily solved by a trip to the local industrial supply joint for an o-ring.  That’s what’s great about a lot of these olde tyme parts is they use stock hardware bits.  Crisis averted.

Now we slap some paint on this bad boy… 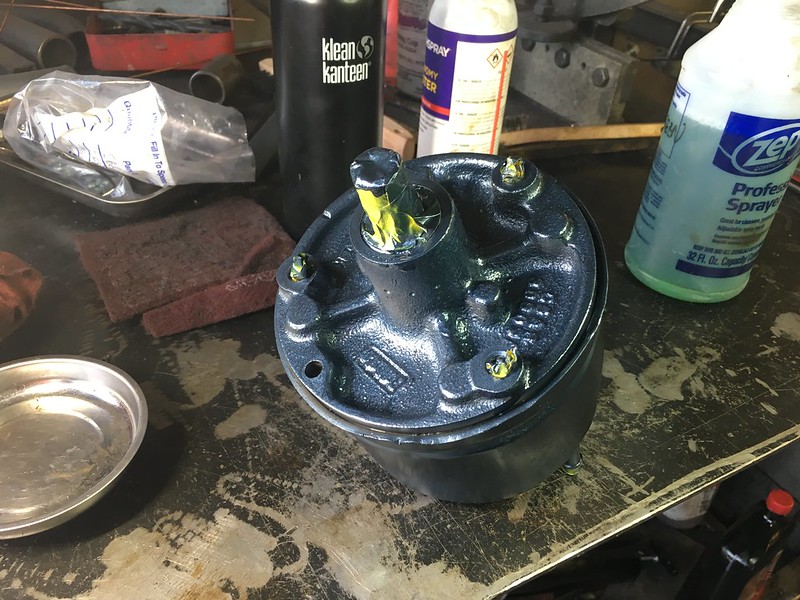 But it doesn’t seem to be quite the shade that was on the faded part.  Oh well.  The paint was the single most expensive part on that rebuild.  It’s about $11 shipped for seal kit, $15 for the paint and .67 for the replacement o-ring. 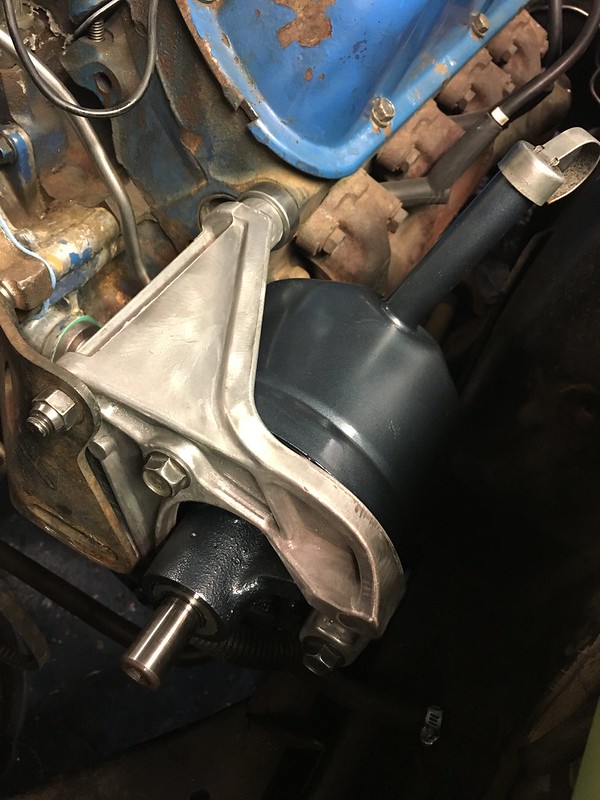 Next up control valve and ram.