He didn’t do anything other than maintain it and fix the collision damage. The carb has been replaced, the radio was updated to a cassette in the 80s, new shocks 15 years or so ago. Still plenty rusty under the car but normal stuff like bolts/nuts, surface rust on suspension parts and wheels. No big cancer sized rust. When I decoded the door tag it’s really a May 67 build not the original release as thought.

I was hoping to get the tank out and sus out the damage from the fuel and the lines. The battery still holds a slight charge on the charger but it’s basically toast. The 15 year old Diehard I’m surprised held anything. I’ll probably get an Interstate Mega so I can put the fake Autolite top on it and look period. For operation I’d like to use an Optima but it doesn’t look the part.

I decided to drain the fuel. Gauge says I have half a tank. Looks like more from the borescope. I don’t want to jack up the car at this point so I hit Harbor Freight for a low cost fluid transfer pump. They’ve been making some great strides in getting better quality tools there. This ain’t one of them… 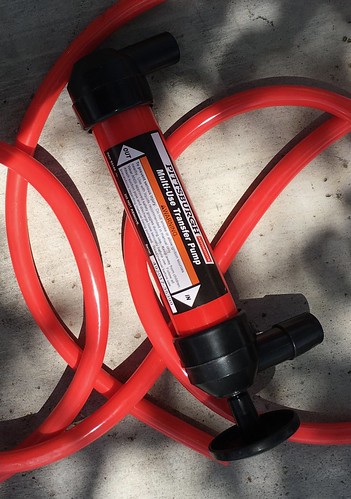 Less than a quart and the seals blow. To add insult to injury if you don’t give them a phone number now at purchase you have to call an 800 number and get the exchange/refund. It was only 5 bucks. I was going to get a longer under hood light but with that I’ll just get it off the truck. For five times the price but the service is fantastic. My other lights now are all from the truck and they are superb.

I also wanted some wheel chocks. I’m using wood because the set I have is keeping the off road truck project in the driveway. It’s a roller but the brakes aren’t in yet. It’s been put on hiatus until the Mustang is at least a safe driver.

Me: “Where do you keep the wheel chocks?”

Me: “The rubber wedges for blocking tires, I thought they were where the trailer stuff is”

Turns out they are out, lots of things picked through looks like a busy weekend. I resisted the urge to then asked where they kept the chalk.

After I syphoned a few gallons into a pan into my waste drum (a gallon at a time, that’s how big the pan was) the smell and taste of rank gas got the better of me and I jacked up the car enough to get a 5 gal dump can under it. 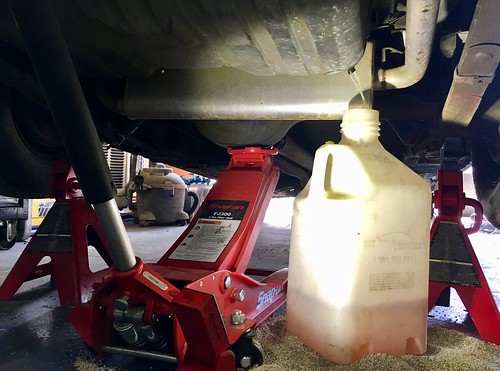 I get to 10 or 11 gallons and there is still more. Perhaps the sender is a bit fuel logged and that 1/2 tank isn’t really 1/2. It looks like they put the original sender in the “new” tank (that’s really 12 years old at this point) I have the original invoice from One Day and I see a tank but nothing else. Looks old. Probably is. I’ve got enough drained that I can see the bottom. The shots from the borescope don’t do the damage justice. Not a good sign… 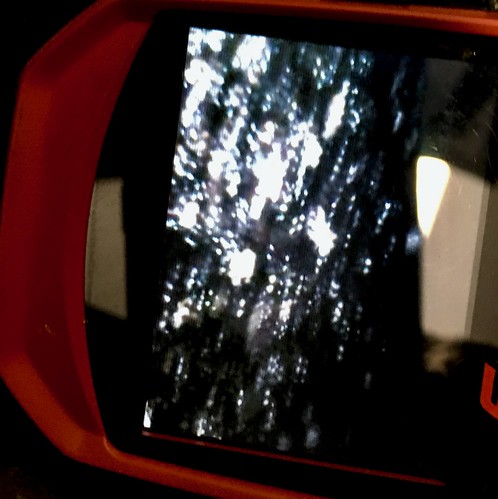 I got a light into the neck to get a better shot for the post. I could tell from the borescope it wasn’t going to end well. It’s flakey and moves around, you can scrub it with the tip of a screwdriver. I’ve used the POR15 tank reconditioners but in this case the tank itself is only about $20 more than the kit. I still need at least the neck filler to tank boot and possibly a sender. 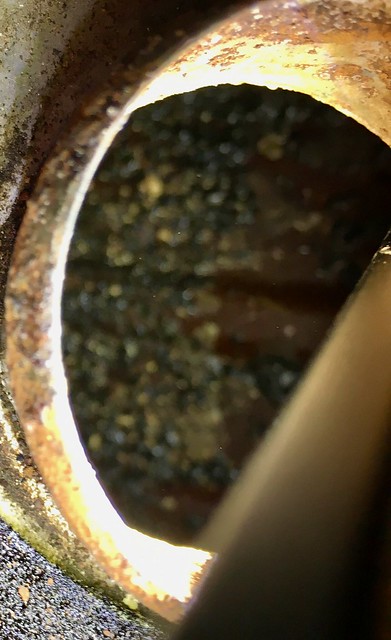 I’ll finish getting the tank out in the morning and start checking the lines. The plug wires will hopefully ship tomorrow from Vegas so it will only be a day or so. I’ve still have oil, coolant, diff lube and trans fluid. The P/S is leaking considerably since there’s been some steering input. All the stuff that’s salvagable and rebuildable will be done. Don’t think the tank and fuel lines are going to be at this point. I was expecting the tank and likely the lines. I wasn’t expecting the steering rack. We’ll see. Remember the comment of unexpected things in the project? Welp, this is it. And not the last either.

67 Coupe, Bringing it Back to a Driver

After about 6 months I’m finally able to get the Mustang into the shop. A 67 Lime Gold Coupe bought in May of 67.   Basic model, PS, no AC, 4 wheel drums, two tone lime gold/ black interior. It was a true secretary car used as a DD. The mother of one of my dad’s high school friends was the original owner. She put about 54k on it until 1982 when he got it as part of an estate sale, house, furniture, whole kit and caboodle. Between 1982 and 2007 he put another 70k on it for a total of about 125k now. He was using it as a regular driver though not his only. Due to health it was parked in 07 with the intention of getting back to to driving it. But, well, life happened and it’s set every since on stands. Now it’s my turn to drive the car.

It’s a true survivor that has had a respray from a rear end collision in
06. Heads were done in the mid/late 90s after the valve seats were toast
from unleaded fuel. It’s a San Jose C code smog pump and all with a C4.
Still has a fair amount of it’s original corporate blue paint on the
engine. Camera down into the cylinders looks good, it hand turns over at
the crank. I’ll do a leak down in the morning. The short block is the
only thing that hasn’t been opened over the years.

Interior is either new (from 07) or has the parts from Cal Mustang ready
for install except for the back seat which is still in good shape.
During storage the steering wheel cracked. Sure would like to keep that
original wheel. Electrically it’s sound though field mice did eat some
of the plug wires. A camera under the dash indicates that wiring it
good, they didn’t make it into the cabin. Body is in great California
shape, minimal surface rust though the rear end repair leaves a lot to
be desired. Some of it was done “half fast”. A couple of chips indicate
a bunch of mud on the rear quarters and deck lid. Paint looks pretty
good considering, particularly for a driver. A So Cal chain collision
shop did it.

First goal is get it to turn over and run using a fuel can. New plugs
and Drake wires should be here in a few days. A bummer is fuel sat in
the tank for 11 years. The tank was new from the rear end crash damage.
Hopefully it’s not too toast and can be resurrected. Same with the
lines.

Goal is to refurb as many parts on car as possible even if it takes
longer. Right now it will be a period correct driver. Not a DD but it
will get some miles on it. Perhaps later a bit of a sleeper resto-mod
but for now just get it back on the road.

This week, fluids, wires, plugs. Bring it to life running on a gas can.
Would have done it yesterday but waiting on parts…

Complete fuel system refurb or replace, replace all engine bay belts and
hoses. While I’m there make sure the trans doesn’t leak and check the
linkage. The shift into neutral isn’t exactly precise in terms of handle
movement though it is in neutral.

Give brakes and suspension a once over. Twice. It stops enough to get it
on and off the trailer. Wheel cylinders, drums, flex lines and shoes
were new when parked. The MC looks like a museum piece. Hard lines too.
I’ll at least rebuild it if the core is in good shape.

That should get me to being able to drive it. Like any other build we’ll
have to see what’s unexpected. Once I’m on the road the under car,
engine bay, etc will get a cleaning, bushings, paint/power coat. I’ll
R&R the engine and trans for that and do whatever I find on/in the
engine and bring it back to corporate blue. I’ll do an Arning drop then
as well.

I want it to start, run, drive and stop in the next couple of weeks.
We’ll see… 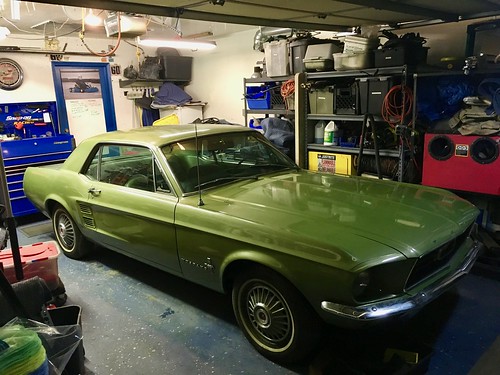