Up until a few days ago I’d been enjoying cruising around, driving to work, running errands.  I put over a couple hundred miles on it since I changed the break in oil.  It drives like an old car.   After I finished the steering rebuilt from the previous post I took it to the local chain joint for an alignment.  Of the places near that could get me in that day they were only ones that would tackle it.  They said they had an “old guy” that worked the alignment rack and he would know what to do.   The toe and camber are pretty easy to set from my racing days.  Setting the caster on this one was cumbersome so rather than spend the time I sent it to the old guy. 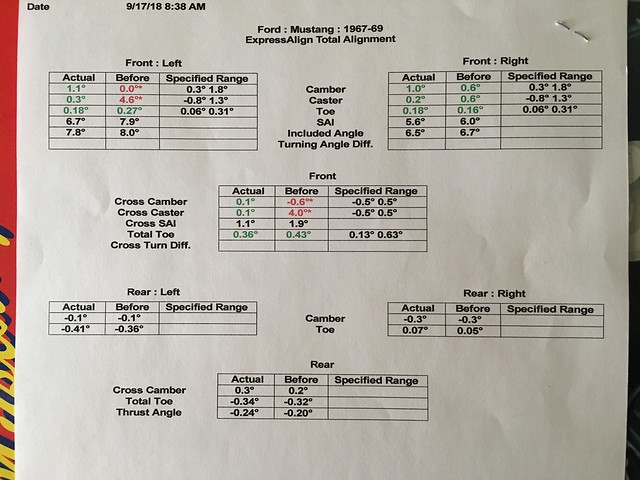 With that complete it didn’t ride too bad.  The steering box gear mesh won’t hold.  My guess is the sector shaft teeth and ball nut teeth are worn.   They were visibly worn when I inspected them to the tune of a few thou and you could tell when it didn’t buff out.  I’ve tried the adjustment a few times.  It adjusts as per book then after a few miles of driving it gets play again.  The nut on the adjuster shaft is still torqued to how I left it.   I measured the pre load with an in/lb digital torque wrench I borrowed off the tool truck.  My in/lb torque wrenches only go down to 12 in/ib and it’s a clicker so no go to measure pre load.  I’m not so keen on asking the tool man to borrow it again (for the 3rd time) though it is a fantastic wrench.  Though I don’t think $605 worth of fantastic for me.  If I were doing gearboxes and rear ends for a living it would make sense.  The play isn’t too bad but bad enough to notice over 50-60 mph.    I don’t want to do a Borgeson or rack and pinion though I’d rather not spend $600 on getting this stocker back in shape.  I can appreciate the guys with resto-modded rods but I want this 50 year old car to drive more or less like it did 50 years ago.

We took the long way to one of the Apple stores in town.  It would be the longest single trip to date purposely routed to put about 40 miles on the car, mostly highway.  It gets up and cruises pretty well.  It’s at 70 before you know it.    Then when you brake suddenly at that speed it’s like Mr Toad’s Wild Ride.  The steering convulsed requiring some race like chops.  The pull under braking was intense.  I ended up replacing the front brake wheel cylinders and hoses.  A bit of a side to side adjustment and at speed (or any time else) it brakes just fine.  The parking brake cables are shot.  Too stretched to adjust.

Around 120-140 miles from the initial oil change I drained it and sent a sample to Blackstone.  I’m hoping for good news so I don’t have to crack it open anytime soon.  It was dark black and sludgy.  Like Fudgie the Whale sludgy. (the bits in the middle of the cake)  I think it could be a cause for concern to at least open it and flush the crap out.  But then as long as I’m in there I should do bearings and rings, then it’s have be measured and honed and as long as it’s out hot tanked.  In other words, rebuilding it.  I want to drive it over the fall and hold off doing anything big mechanically until next summer.  Except paint and body. You can’t do paint and body here in a non climate controlled space in the summer. 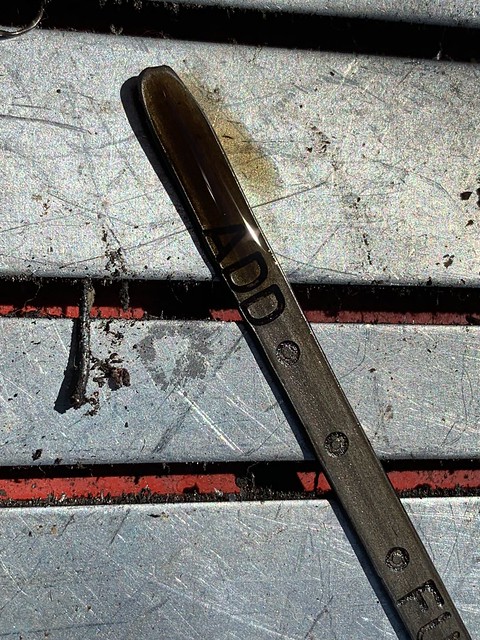 Hey let’s cut that filter open and have a look-see. 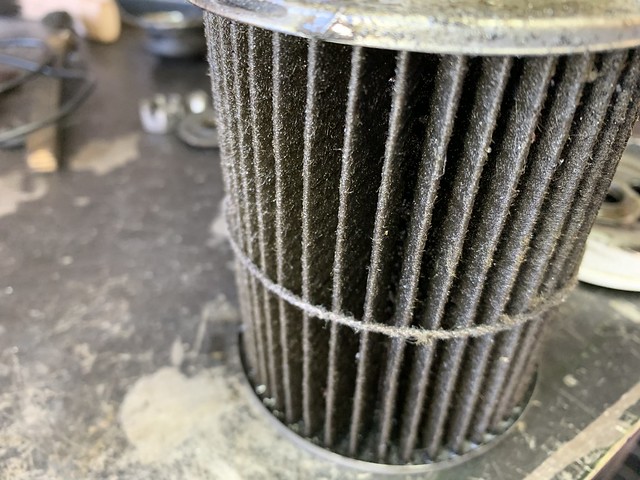 Yikes!! Hurry let’s put it back together so we don’t have to see the inside of the canister.  Oops. too late. 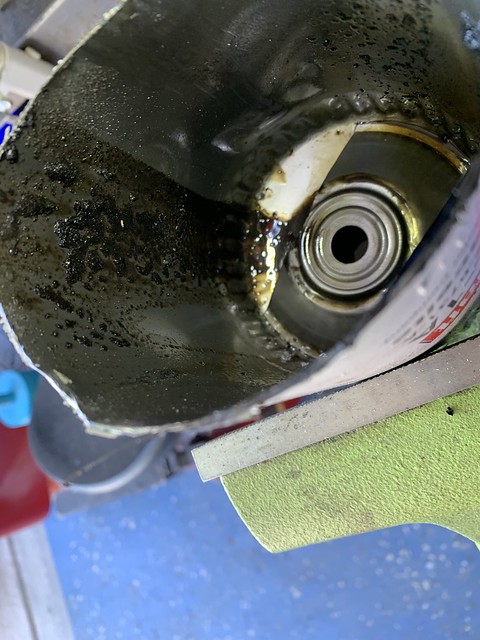 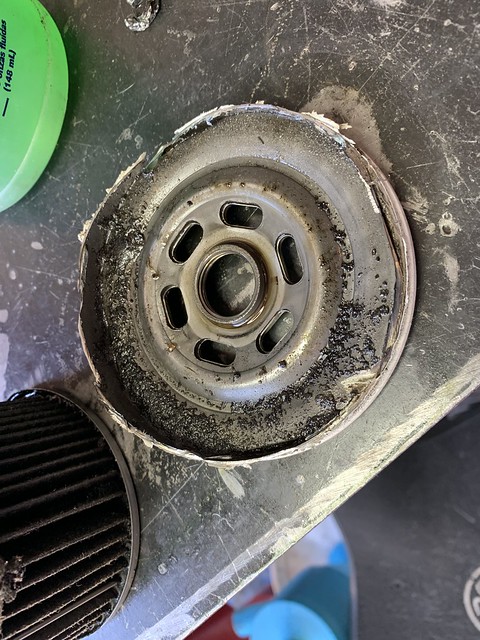 Next up an unwelcome surprise on the interior refresh.