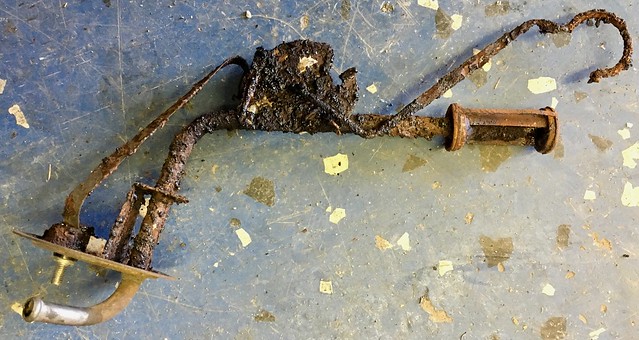 Yep, sender is toast. That explains the reading issues. Not only was there no float, the arm was stuck in one position. The collision shop of years back didn’t replace the tank as thought. It’s the original tank and sender. They also didn’t use the right screws for the filler neck to rear panel, use sealer when the tank was reinstalled and didn’t use a filler neck gasket. They did paint some sort undercoating on the tank. It neither matched the color of the rest of the car even accounting for age and wasn’t the same texture. Made it look somewhat new from the bottom of the car. It’s the same as they used in the collision damage area under carriage so I don’t think they were trying to pull a fast one. No tank on the invoice either. 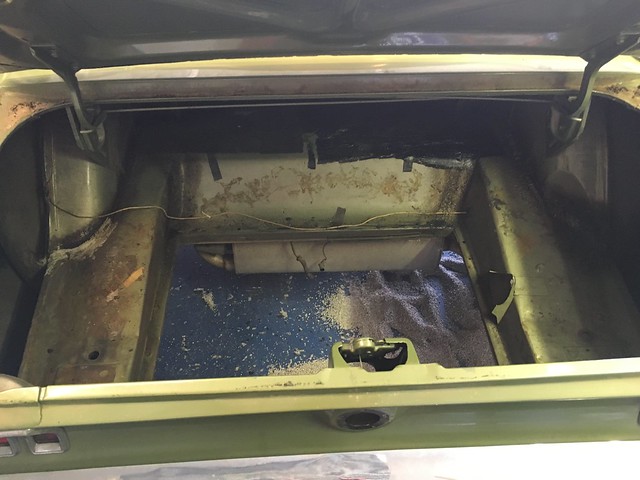 The tank is salvageable. I’m on the second step of a three step process. First rinse with methylene chloride. It’s the active ingredient in Ben17 paint/power coat stripper. You dunk it or brush on the paste form and even the most adhered powder will come off. Or paint, or any coating including ceramic engine or chassis paint. It’s great. It’s also nasty to work with. Full PPE. Doesn’t treat rust though. That got the big chunks of gunk broken up and out. Tape up the orifices, swish it around, no BBs or hardware needed to break it free. https://www.bencosales.com/powder-co…ating-stripper

The next step is POR15 cleaner/degreaser. (used to be Marine Clean) It’s basically lye and butoxyethanol. Not quite as nasty as you mix it with hot water from 1:1 to 5:1 but try not to get any on you. It’s in the second soak now. It will etch the remaining surface rust as well as break down what’s left of the fuel gunk. Once it’s clean I’ll convert what rust is left with a rust converter. The commercial products are largely the same active ingredients, tannic acid and butoxyethanol with some other acids to lower the ph to speed the conversion. Eastwood has a good one. I like it. At that point I’ll water test it to make sure there are no pin hole leaks from treating the rust.

If you are going to buy the chemicals or if your tank is bad enough it can’t be cleaned or has too many pin holes it’s going to be cheaper in the long run to buy a base level repro tank. Unless you’ve got a rare candidate where you want to keep as many original parts no matter how you have to restore them. I have both Ben17 (and Ben15) as well as the rust converter. It’s a standard thing for me to use. The POR15 cleaner I bought, about $9 at the local auto body/abrasive supply shop.

I’m at the first “might as well do it while I’m there now” moments. But I’m going to resist the urge to do it. For now. The urge is to go ahead and paint the trunk. As a bonus my tank dampening mat and the original plaid trunk liner are in fantastic shape. For this my first choice is Deltron DBI, the PPG paint for underbody and interiors. Single stage, matte finish, don’t have to clear it. Though for about half the price I can do it in a single stage TCP Global urethane.

The plug wires will be here tomorrow. Change the fluids, rustle up a battery and I should be good to go to get it started. The brakes look good, they’ll need new fluid and a bleed. Once it starts, runs, drives, stops I can get it the 8 miles or so to the DMV for a VIN inspection.