It’s back together. Or at least was for 10 mins or so. Here’s how it got that way…

Pump went back together well. It had better. There are only two bolts, a plate and a seal. I’d still like one with the original style part numbers and casting. A lot of service on this was done before the parts guys would say “nice classic” and instead say “great, another old car”. It was/is a driver, got driven and was maintained well but maintained like a driver and not a concours. 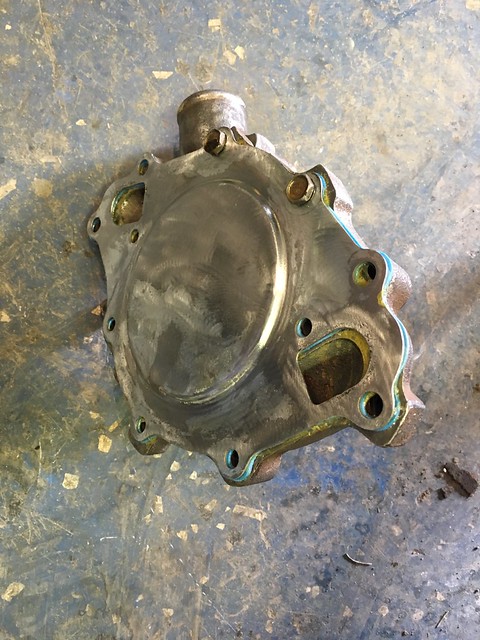 Tip for remembering which bolt goes where. Dot them with paint pens. 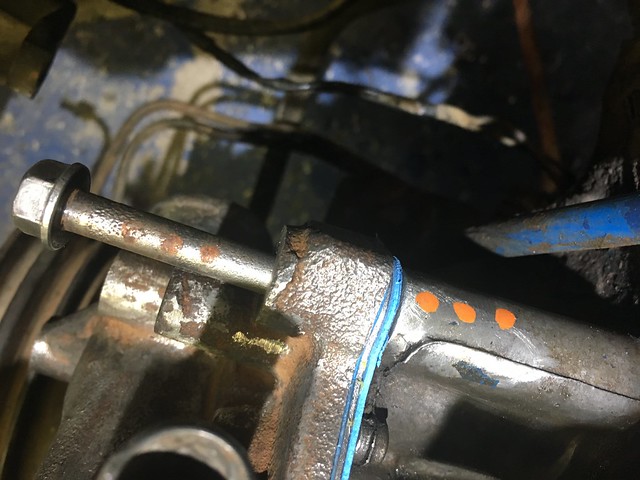 The bad news is two of the through holes on the timing chain cover are stripped. On one I noticed it when I removed the bolt. Aluminum threads were in the bolt. If I’m going to put a timing chain cover on I might as well take the engine down to the short block and check the rest of it. Don’t want to do that yet. Plus I was looking at mine and at the reproductions. The repros have fins on the top. Took a quick look at the Mannel book to see exactly what was on mine. Was mine an original or did someone swap it at one point? It looks like it has never been off and still has some Ford corporate blue on it. The book says mine doesn’t have the fins. Fins only for the early 67. Mine should look like it does. But it’s hammered and has two stripped holes. 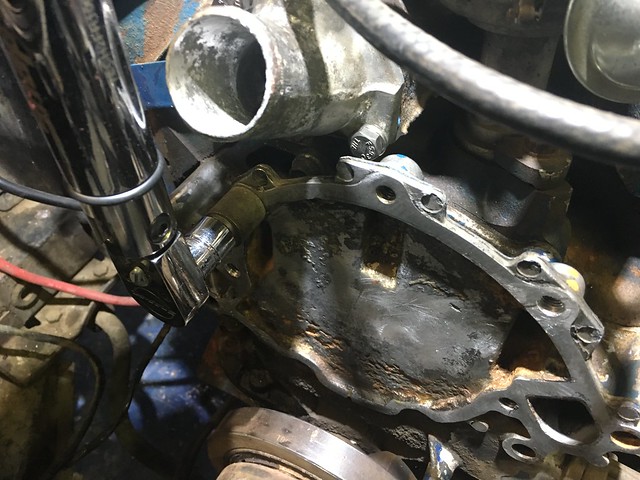 So time for a couple of Helicoils. If you aren’t familiar a Helicoil is a thread replacement. As the name indicates it’s a coil that you install in place of the stripped threads. First you drill the existing threads out enlarging the hole. It’s usually some size drill you won’t have in your index. This one is a 21/64. The kit provides a special tap to use in the enlarged hole. Once you thread the hole with the replacement tap there is a tool to insert the coil into the newly cut threads. The insertion tool can be a bit though to use at first. Screw the coil in, break off the tang in the rear of the hole and you’re good to go. 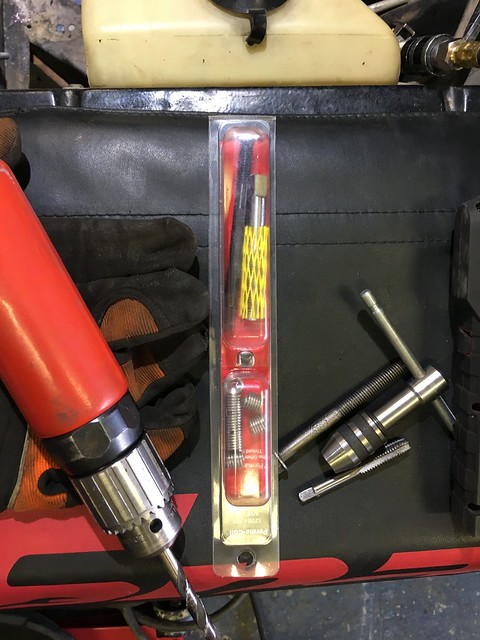 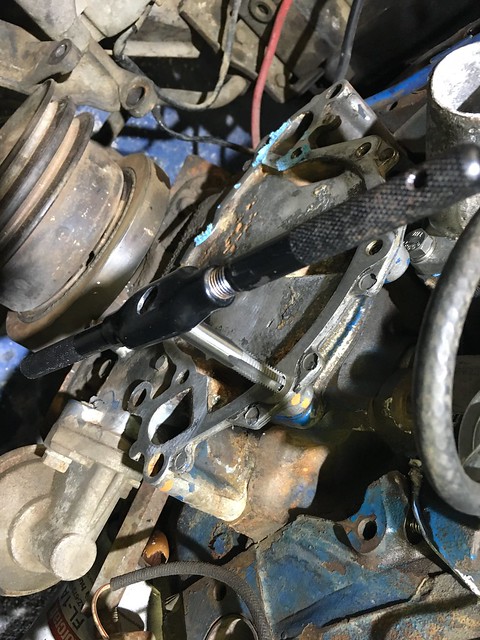 To test the inserts I take something to bolt to the repaired hole. In this case I use the spacers used to mount the smog pump. I tighten the fastener to the torque that will be used in the final assembly to see if it holes. At this point I now have two repaired holes that will support the torque to install the water pump. 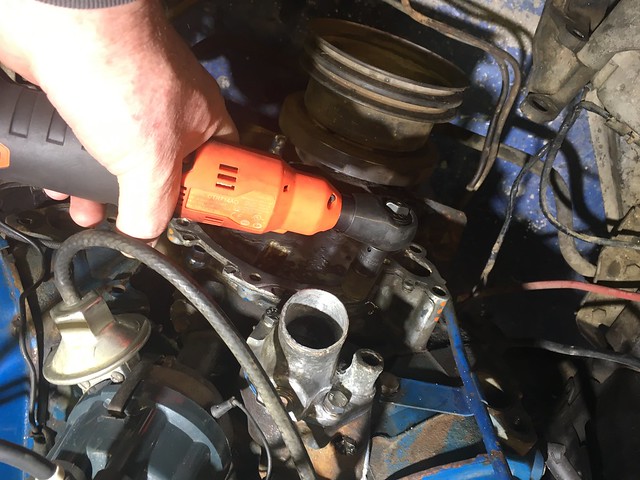 Now for the final bolt and torque. If it’s a part of the rotating assembly or fluid conveyance system (oil, water, fuel), has a critical gasket, steering, brakes or suspension I use the torque specs. This is it just prior to installing the smog pump. Yeah baby, real San Jose car with first generation emissions. 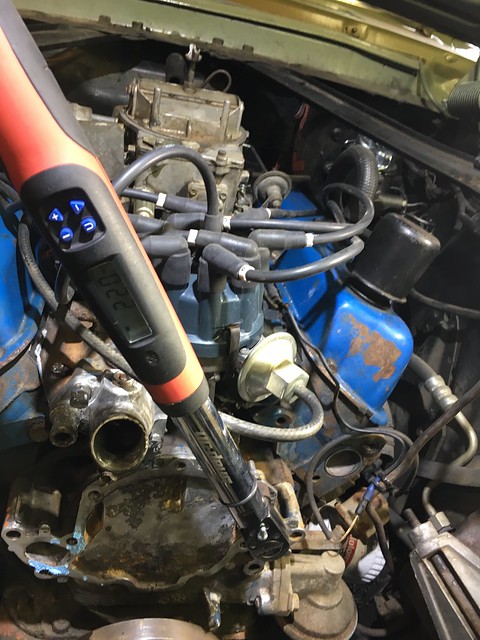 Original FoMoCo engraved spacers for the smog pump mount (the empty hole in the pic above). I didn’t notice the engraving until I cleaned them up. 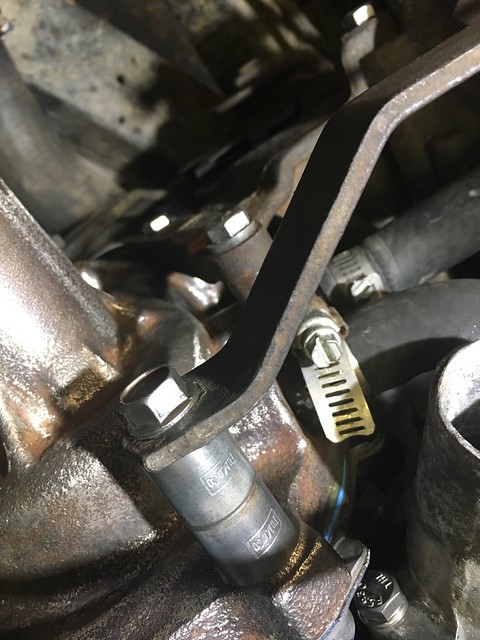 Check all the connections, everything is good and tight. Ready to do a test fill. The test fill was going well until it got to the thermostat/outlet fitting. Leaking. Not a stream but a steady drip. At first I thought I’d hosed the manifold gaskets on the install. After taking a look-see with the borescope it was coming from the underside of the fitting. And no wonder. That space where the light comes through around the 3″ mark on the rule should be flat. 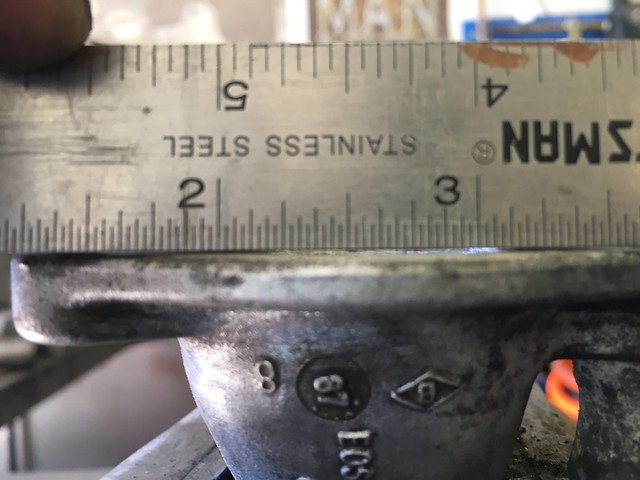 There is a nice warp in the face of the fitting. The indent where the thermostat sits is worn as well. I could surface a bit off the fitting but the indent is still in bad shape and that’s a lot of trouble to go through for a $20 part. One of the problems when restoring parts like that is when you take the kack off sometimes that kack is what is preventing the leak. There is some severe pitting I thought would be taken care of with the Gaskacinch. No such luck, too badly gone. I could RTV it and it would hold but it will eventually need to be fixed properly. The issue I have now is getting a part with the same stamping as I have now. The repros have the part number but not the original Ford logo. 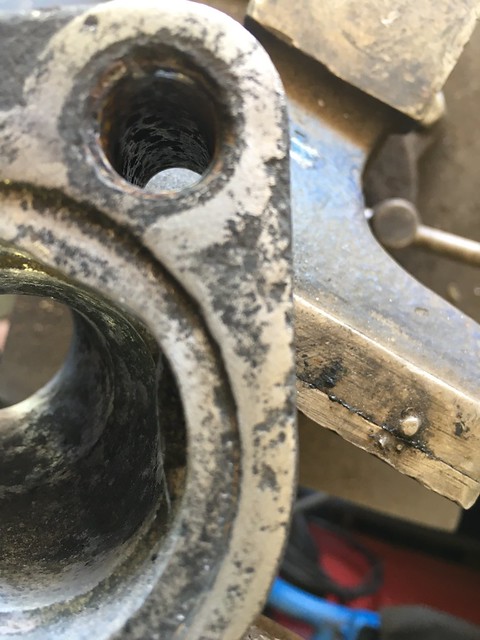 That’s where I am now, waiting on parts. Or rather looking for the parts I’d rather have. I’ve checked the usual dealers but I’ll need to dig some more using the part number from the casting and the Mannel book. I’m half temped to spuck the thing together or get a part to tide me over and run it a bit in the meantime to get a handle on other issues like steering and suspension. Until I’m sure it’s more reliable I’m not going to stray outside of a 15 mile radius from my house. That’s what my Hagerty road service will provide should I get beached again. In the current state I can at least do leak down and compression tests. I’ll take it from there and see what happens.