The thermostat housing mystery is solved. Turns out it’s not really a mystery. It’s a part from a 1987 Ford V8 used in F150, Bronco and Country Squire station wagons. I’m sure there are other old guys here that remember those. When I was in second grade we had a Chrysler Town and Country station wagon. Complete with fake wood grain.

I finally decoded the part number by realizing the second character is a numeric and not an alpha. Looking at the Drake reproduction for the car the pic at CJ had the 64-65 part number. A gander at Mannel shows the right casting numbers per year with pics. I’m still learning how to use the appendix in Mannel to see which parts span multiple years. For example in the section on your engine there might not be any specific info on that part if it were used in a prior year. Many times, probably most times, there is a reference to using the same part as previous years. To find which years you go to the appendix for that type of part and there will be a chart with both casting numbers and engineering numbers and a reference to a pic of that part.

I went ahead and got the replacement that wasn’t period correct but had the threaded boss for another water temp sender. (and they had the engine assembly manual in stock now so I picked that up as well) After I ordered as I was looking at the old setup I realized that the location of the new sender would be on the wrong side of the thermostat. When the thermostat was closed or failed you wouldn’t get a proper temp. I’ll tee off the heater hose outlet for the new/additional sender. I want to keep the stock gauges in the dash for historical purposes and stealth the modern gauge in the cab where it’s not so easily noticeable. You’ll look in the car and think “oh that’s a stock interior” but there will be a somewhat hidden water temp and oil pressure. If the repros have the correct casting number I’ll pick one up otherwise I’ll leave the replacement in.

Hopefully my parts will be here Weds just in time for me to finish the engine testing. Today I did compression tests, both wet and dry on each cylinder. There are tons of places that you can get instructions for the test. You can get the gauge as a loaner at the parts store or pretty inexpensive at Harbor Freight. You don’t need tool truck tools, just a plug wrench, the gauge and a way to get a bit of oil into the cylinder. It’s an easy test that will get you good info from your engine. Google it for some good tutorials.

Here are what the plugs look like after about 50-60 miles of running. You can tell a good deal of how your engine is running by “reading” the plugs. Cylinder six is really fouled. Something is going on there. After this few miles you’d want them to look like the plugs where you can still see white on the insulator. Those others shouldn’t be that dirty with only 60 miles or so on them.

The cylinder numbers are 1-4 left to right on the upper row and 5-8 on the lower row as you look at the pic. 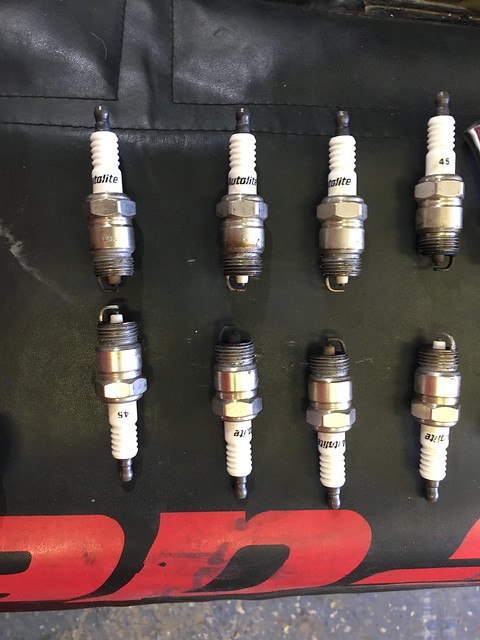 Here’s the results of the compression test. A couple of interesting findings, perhaps related to the heat buildup I saw in the thermal imaging and the history of the car running hot and sometimes overheating. And maybe even that noisy lifter. The layout of the results on my whiteboard is a bit confusing as it doesn’t map to the locations directly as you look at it. Green is the dry test, red is the wet test. You do the dry tests first then move to the wet test. The wet test is the same as the dry except for putting a bit of oil in the cylinder to see how much better, if any, that it seals. The wet test should show an increase in compression unless there is an issue in the valve train. The FSM calls for 130-170 psi at sea level. 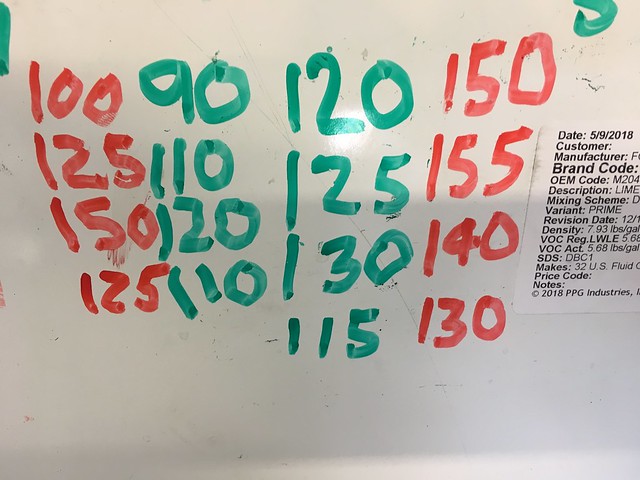 This is hole number 6 dry test, the one with all the carbon 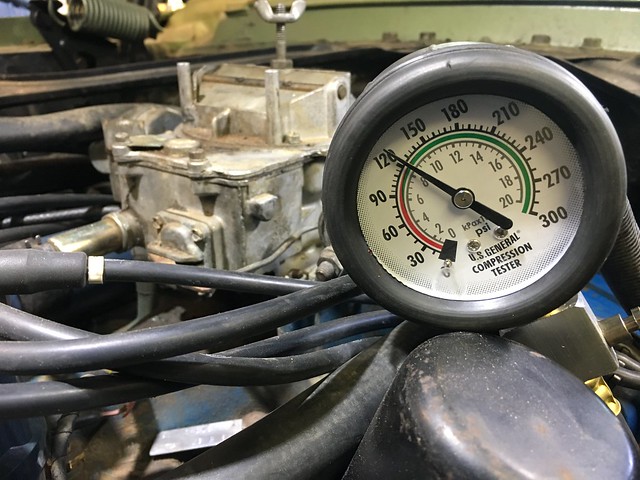 The wet test of number 6 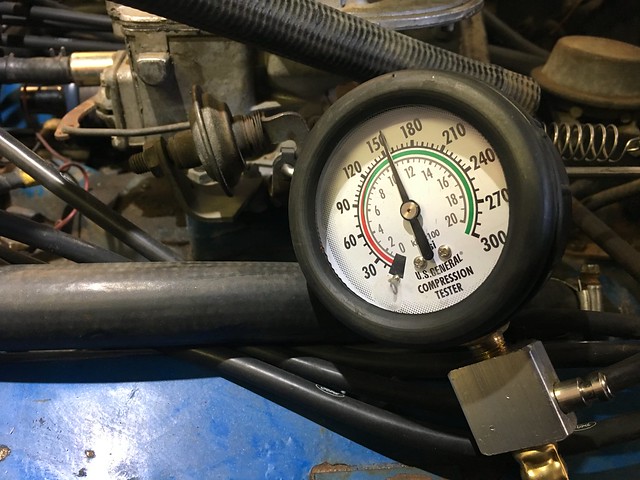 Most of it shows a 51 year old engine that has 125,000 miles on it. There are a few things that stand out and need to be investigated further. There are things that point to rebuilding it sooner rather than later but no show stoppers. At least right now. Numbers one and five are the most out of line.

Hole number one readings are in bad shape. I checked it a few times. A reading of 90 is bad news. Only going up 10 psi in a wet test makes it worse. The plug is a bit burnt but not saturated in carbon like number six. It could be too lean. What we will start to look at is extreme wear in that hole due to heat buildup near that part of the block and damage to the valve train on that hole. Six has a great deal of carbon. It may be the intake valve isn’t seating or is stuck partially open. It’s got the best compression readings wet and dry. It’s important not too assume too much at this point until we crack it open, measure and inspect it.

Tuesday will be leak down test day.