While I’m still waiting on the vise I was inspired from a thread at VMF to make a dust separator for the blast cab.  The Amazonians have increased the delivery time another couple of days but at an almost $300 savings for the vise and a 4 lb hammer thrown in for free I can wait.  And so will the steering component rebuild. But I can refurb links and mounts in the meantime.

My cabinet is the smaller HF cab, about 30 lb capacity.  I’ve done some mods so it performs more like a pro cabinet with a few exceptions.  First exception it leaks.  Like the Titanic.  Even with a bunch of RTV along the seams.  I long ago cracked the glass (since replaced), it had no light when I bought it and the gun and tips aren’t that good.  The material hopper doesn’t settle so well so you need to move it back to the pickup tube by hand.  But it’s inexpensive.  It can be made to more of a pro level with minimal cost.  Minimal compared to buying a new higher end cab.  A good high end cab will be a grand plus shipping.  You can buy and mod the HF cab for under $500.

TP Tools have a line called Skat Blast.  It’s pro level gear that’s pretty affordable.  They sell parts specifically to upgrade your HF (or Princess Auto) blast cab.  You can replace your glass with tempered glass.   Another feature is a liner for the glass so the glass doesn’t pit.  Those are a big help for keeping the visibility as good as you can.

Perhaps the biggest improvement to the cab is a new gun and pickup assembly. 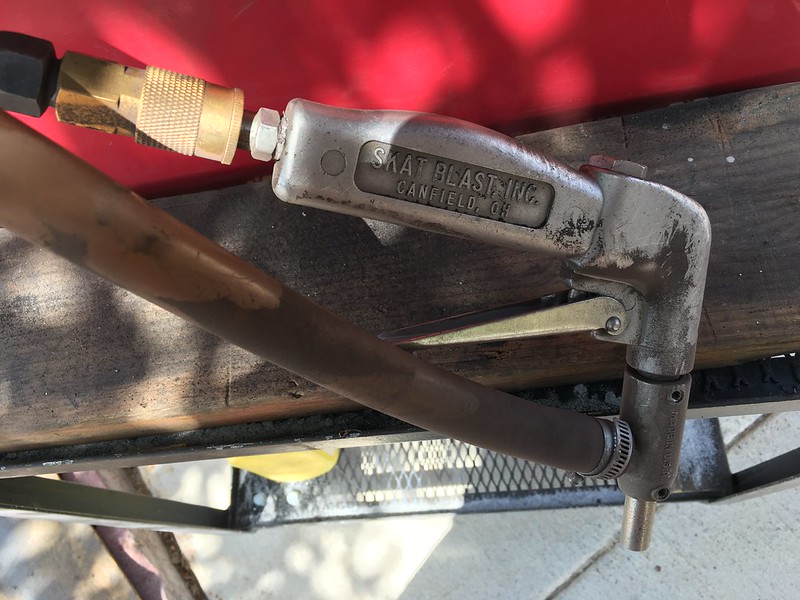 A great thing about this gun are the interchangeable tips to match the CFM on your compressor with the gun.  By doing this you reduce the risk of running out of air and having to wait for the compressor to catch up.  The kit comes with medium tips which is 10-15 CFM @ 60-100 psi.  My 60 gal 3.5 hp compressor is rated 11.5 CFM @ 90 psi.  Last year I switched to small size nozzle, 4-8 CFM @60-100 psi and had the same material removal results but was able to use the cabinet for longer stretches before running out of air.  The $89 kit comes with an excellent pickup tube and siphon hose.  It blows the stock gun and tube away.  Add the swivel air hose from HF to replace the stock  air hose and it’s a solid combo.  The kit alone will make a world of difference.

The final touch inside the cabinet is to add some light.  The stock cab does not come with a light.  I used this lighting kit as an example and picked up the parts at the big box home improvement store for a lot less.  Another trick I use when doing a lot of blasting is locate a regulator locally at the cabinet.  I run the main line up to 150 psi or so (my max is just under) and use a small regulator to take it back down to 90 psi.  If you use too high a pressure you’ll wear your abrasive and not see any better material removal.  Using a local regulator with a higher pressure feed allows for less pressure drop in the line between the wall drop and the hose that leads to the cab.  Alternately if your cab was always in the same spot you could plumb a permanent drop.  Mine is on a roll cart that moves depending on what I’ve got going on in the shop.  I’d love to have a dedicated area but that’s not in the cards now.

The next step is to update the ventilation system.  On a big dog rig you’d have a dedicated vacuum/recovery system for the cabinet.  Pro level can run over a grand and you can get a great entry level dedicated vacuum for about $300.  What works well for me is a 6 gal shop vac.  It’s not as robust as the above offerings but it pulls double duty with normal shop vac duties.  If you can go a bit bigger on the vacuum.

The big issue with using a vacuum is the lack of dust separation.  The fine blasting dust residue get sucked into the filter and can clog it fairly quickly.  To off set this I also use a filter bag and the best HEPA filters I can find.  Long term this use may cut the life of the tool short but if you aren’t blasting that often, say a few times a month, this is a good option.

In addition to vacuum clogging dust more usable particles of media may get sucked out as well.  Between leaking, dust and ventalation I’ll lose up to 7-8 lbs on a 30 lb load.  To help with recovery and give the vac a bit of a rest (it’s been a trooper) I just built a vortex style dust separator.  It’s also called a “cyclone” type separator. 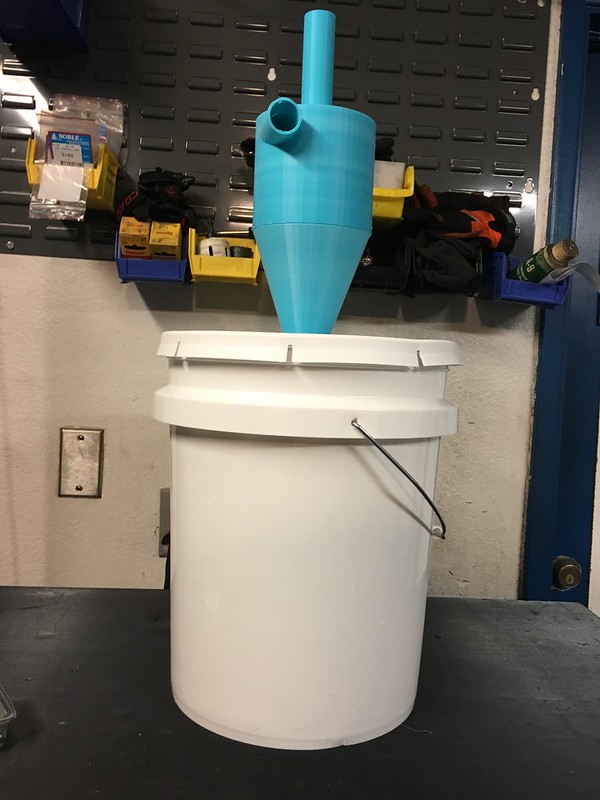 How it works is a vacuum is applied to the top of the vortex generator and the cabinet exit is attached to the side.  As the vacuum is applied the spirals inside the separator creates a vortex, or cyclone, that separates the dust and whatever blast media was sucked up and deposits it into the bucket.

I 3D printed mine for no other reason than because I could. For 5 years my wife and I owned a small batch manufacturing company that made DIY 3D printers and kits.  For much of that time we had six machines running nearly 24/7 in addition to a laser cutter running 6-8 hours a day sometimes 7 days a week.  The files are at https://www.thingiverse.com/thing:269477

You don’t have to be a glutton for punishment and print your own, you can get similar parts for $15-20 online.   With some Google voodoo you can come up with all sorts of options.  Or you can build your own using a different design as outlined in the thread at VMF that inspired me.

For those curious about printing one…

Here’s the the cone base complete. 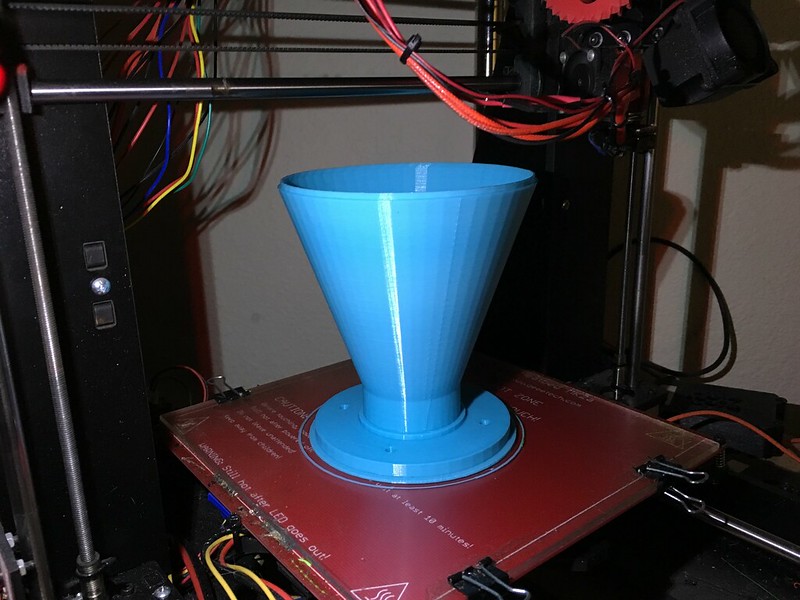 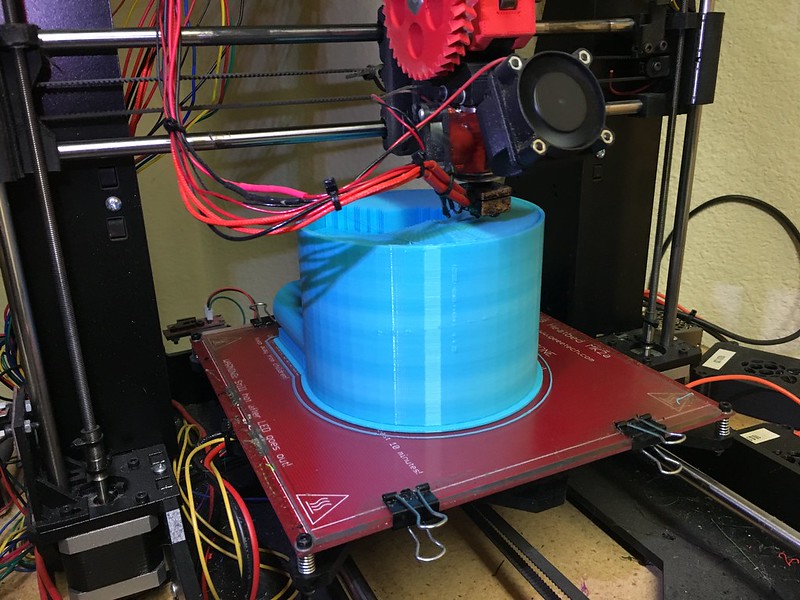 Some printed parts need support and the inside of the vortex needed such support.  However there are sometimes when either the stock supports are inadequate or are such that they are fused to the base part more than normal.  This was one of those times and in order to get the supports out I had to cut the part in half.   If this was a part that was going into production you’d do some tests, perhaps segment the part differently and/or design custom supports.  It’s a lot easier than it sounds if you’re familiar with the process.  On some of the pro-sumer machines (and a good number of the pro machines) there is a second print head that can print water soluble supports so all you have to do is let the part soak.  Normally the support would spool out like a ribbon as shown in the pic below.  You can see the ridge inside the main structure where the support fused to the main body making pulling it out in one piece not possible.  Best case would have been pulling on it at the bottom and having it ribbon out like spreading cake frosting.  Mmmm, cake… 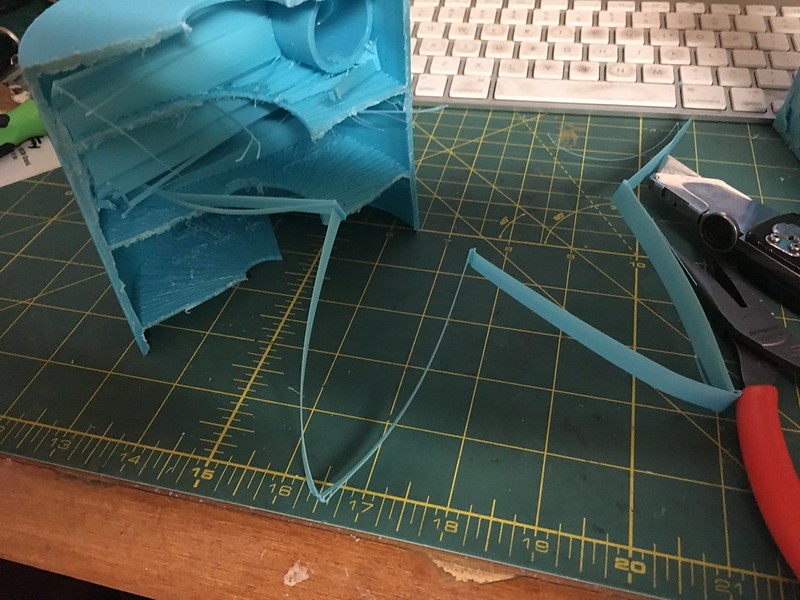 I hacked it in half knowing I could reattach this thermoplastic (PLA) with any glue suitable for styrene.  From there I removed the supports by hand.  Not too brutal but it wasn’t to plan either.  Test mounting half and taking the pic so you could see how it works inside I mounted half on the cone. 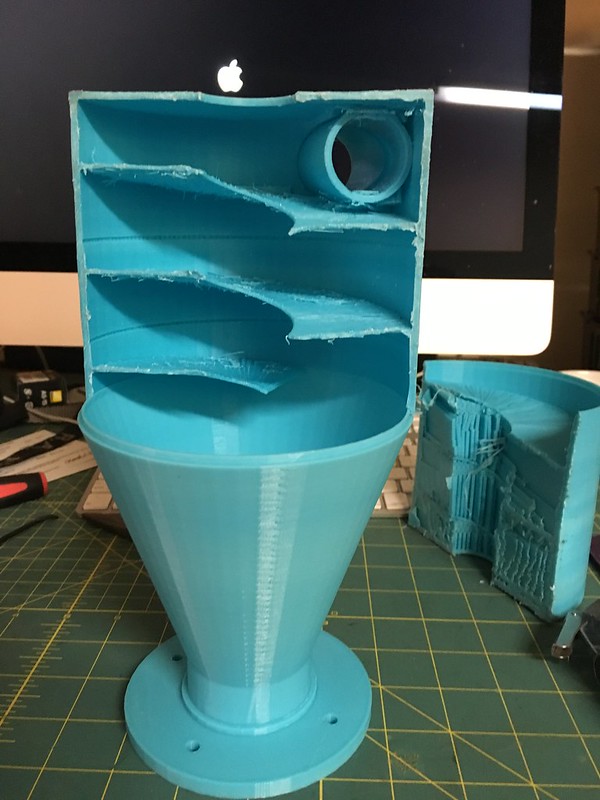 With that the other side was cleaned (you can still see it with the supports on the above pic next to the mocked up parts) and glued together and taped closed for a couple of hours.  From there I glued the vortex to the cone.  I took a five gallon bucket, drilled a 2″ hole in the top plus 4 1/4″ mount holes.  After the assembly dried I used 6-32 screws, washers and nuts to attach the vortex assembly to the bucket.

Here it is in action… 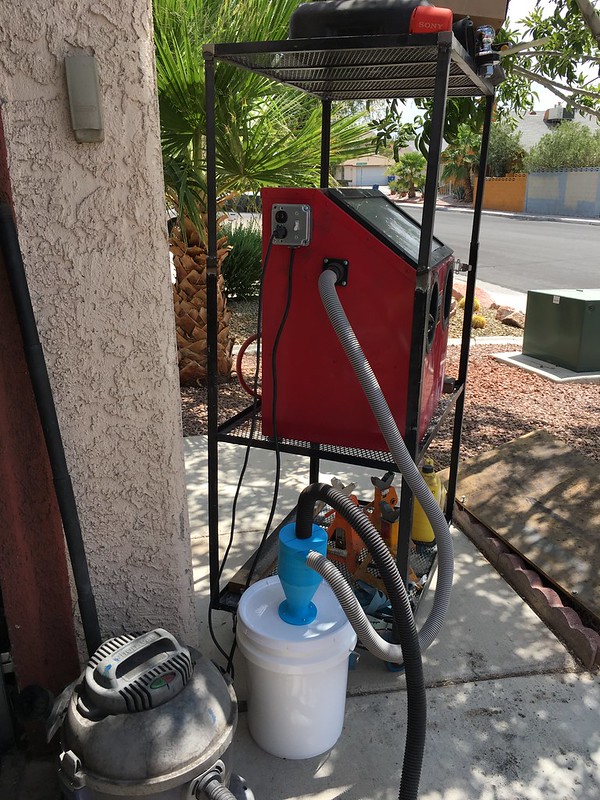 It works well.  I don’t know how much of the blast media I’ll be able to reclaim but at least I’m keeping a bunch out of the vacuum. 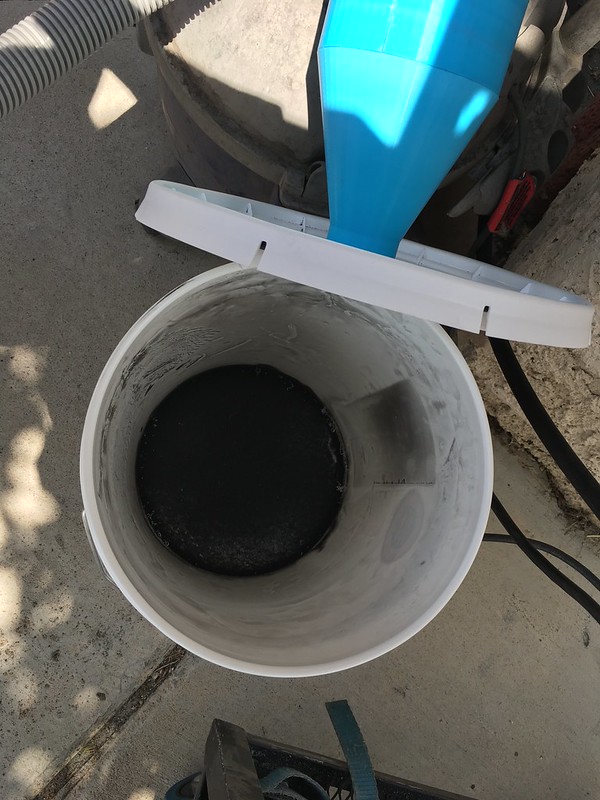 Here’s a part, before and after.  It’s the power steering ram mount. 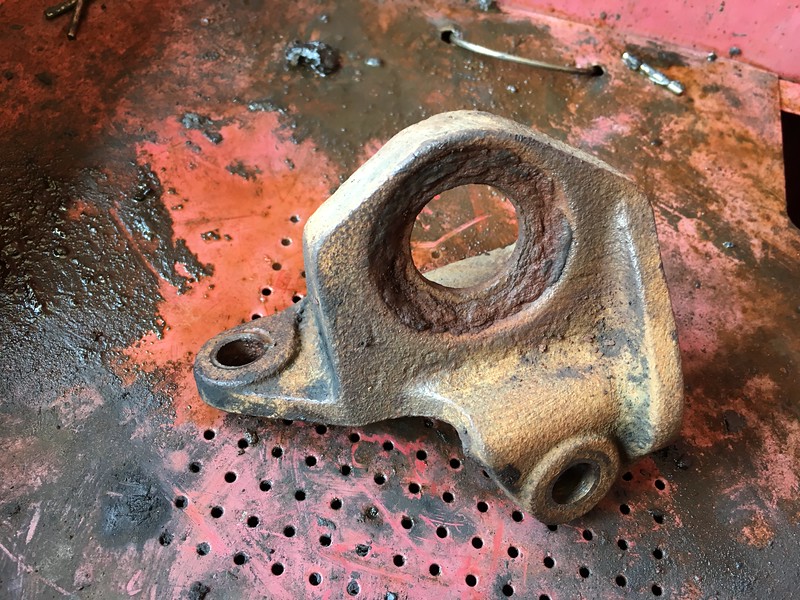 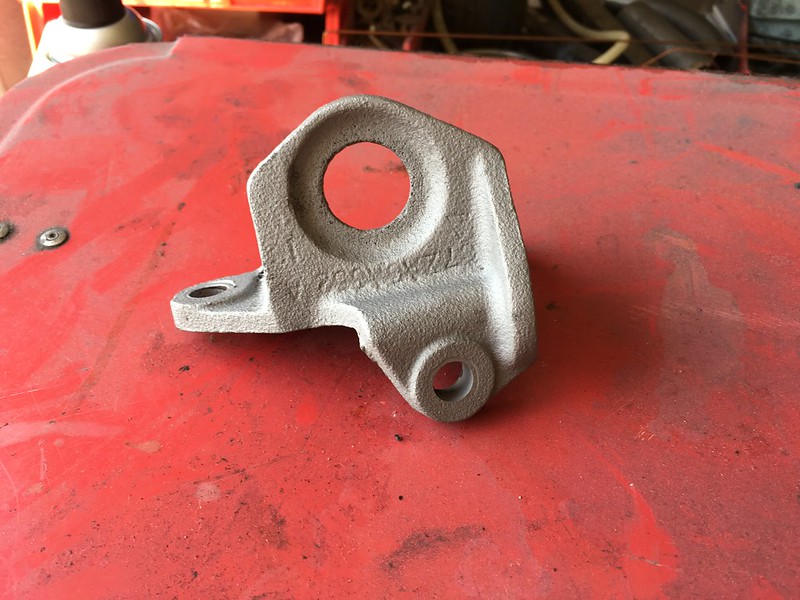 If you’ve got the compressor to drive it and the space to store it for well under $500, or even under $400 shopping smart you could have a tool that makes a world of difference when restoring that 50 year old classic.  And it would work well on the car too…