It’s that time of year where it’s getting hot. We’ve been kissing just below 100* outside making it just a bit warmer in the shop. It’s past the time I can paint and do body work (the catalysts don’t work properly at our summer temps). Paint and body are a long way away and I’ll have two collision shop jobs to tweak on. One not so bad, the other a disaster of a rear quarter repair. Looks good from far. But far from good.

Time for the Portacool… 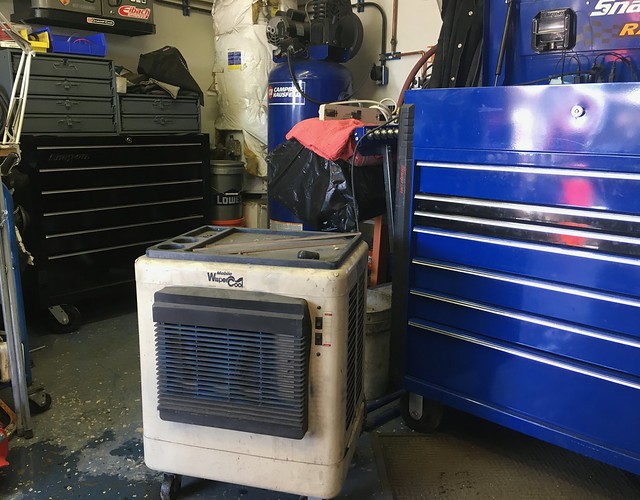 Finishing up on the brake system refresh it’s pretty clear that the fluid had set for a long time. The chunks in the bottom of the large chamber on the master cylinder are coagulated brake fluid. That would be the chamber for front disc brakes. This is an all drum brake car.

A new Cardone from CJ and all is well. The hardest part of the job is contorting under the dash. Looks like a dash creeper is in the cards for me. This was the first of many, many times I’ll need to be under the dash. I’ll likely spring for a standard Whiteside instead of the tool truck designed and branded unit. My understanding is Whiteside makes the version for the tool truck. The tool truck version can go to 30″, the standard is 24″. The difference in price is almost $200.

All of the lines and interconnections have been flushed cleaned and reassembled. The lines held up surprisingly well over the years. The only pitting of note was where the rear main tube turned up into the engine compartment and in the rear from the junction to the left side wheel. Other than that no kinks, creases or crushed lines. The sprials on the rear lines need a bit different media to clean them, one where the profile is vertical to the rotation to fit into the nooks and crannies without taking to much of the base away. They make a Sctochbrite bristle in that config but I don’t have any. By the time I got to it there was only an hour or so left to get to the local industrial hardware before the holiday weekend. And it’s packed here on Memorial Day weekend. If it wasn’t packed here we’d starve and I wouldn’t be able to have such an expensive, time consuming hobby.

I have some 2″ wire wheel discs that worked great on the line covers. 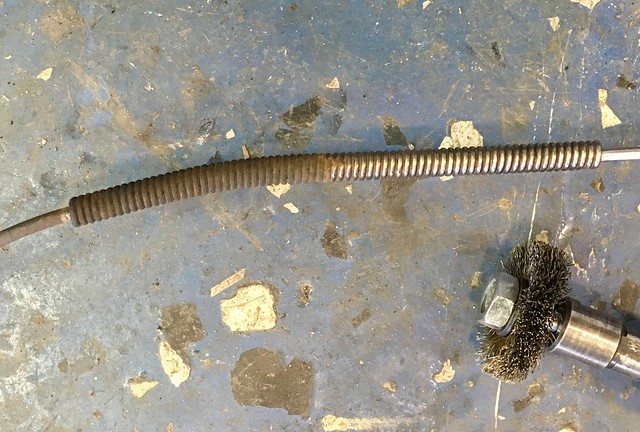 Here is the rear, cleaned, flushed and back together. 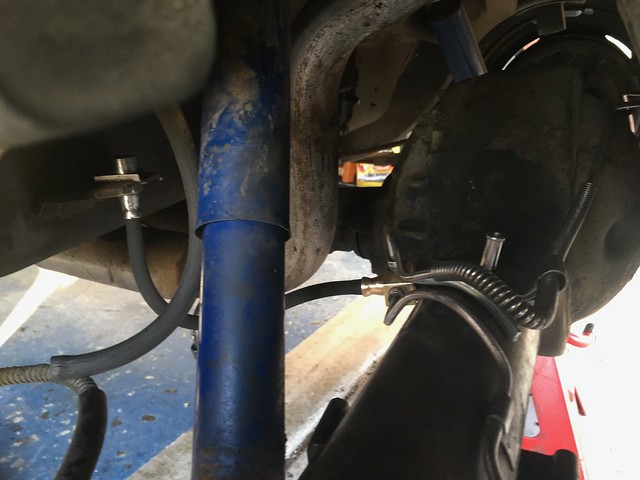 Everything is ready to go except the pressure differential valve/piping manifold. It’s the brass block next to the master cylinder that distributes the fluid and alerts to changes in pressure on either side that could indicate failure. It’s a mechanical switch that triggers an idiot light. Whomever did the last brake job apparently broke it and the switch port has been open for who knows how long. At least 11 years at this point.

Best I can tell that particular single conductor switch and the housing were used only in the 67 model with later years using a different two conductor until ’79 or so according to parts references. I couldn’t find any NOS or used switch blocks/manifold and only a couple switches correct for 67. You can make other years work or use fittings for distribution and forgo the warning light (if you can’t tell half your brakes have failed you shouldn’t be driving…).

The goal here is a historically correct representation of the car as it would have been a year or two after it was purchased. They won’t pick me for Pebble, I’m not going to show at an MCA and Carini isn’t going to show up at my barn. Mostly because I don’t have a barn and I don’t think he likes America muscle cars anyway.

That means rebuild the switch block. First up, get it out of the car. Easy enough. Next remove the plastic threads that were broken inside the block by scoring the edges of the plastic with a small chisel and using a large tip slotted screwdriver to turn it out. The plunger that activates the switch is stuck. I mean stuck. First I plug all the openings except on to inject air, 150 psi, into the housing to dislodge it. 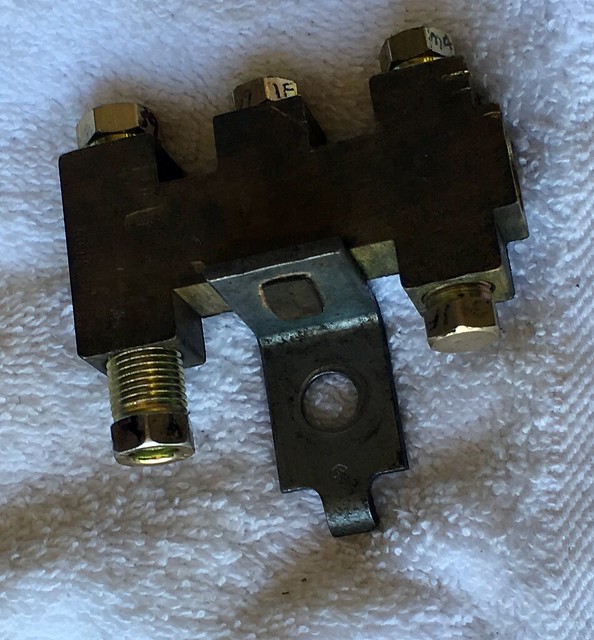 Not even close. The air whistled right past the seals on the stuck piston. Now on to plan B. If at first you don’t succeed try again. With a bigger hammer. I got out the air hammer and the new nylon tips I got not too long ago. This is a tool truck only thing as far as I can tell. The hammer bit uses interchangeable tips. They can be this plastic sort of nylon, steel or aluminum. I use them on the fabrication side to planish bodywork and like shaping or if I just need to hammer the heck out of something. 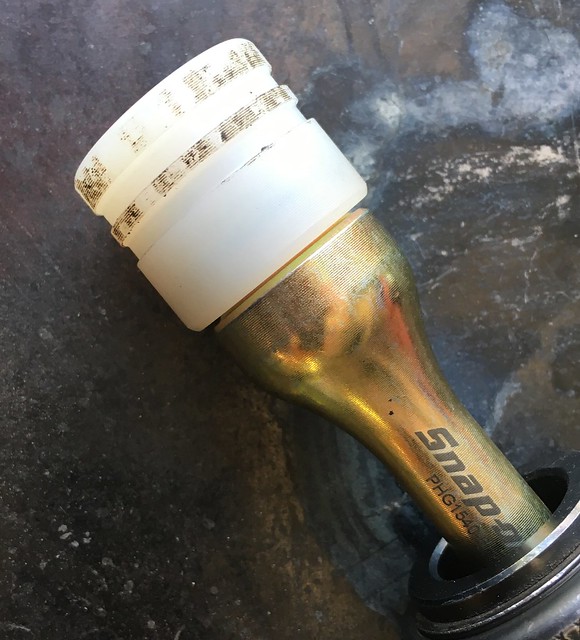 No go. Even after a few tries. Someone here at VMF suggested to someone else in another thread from long ago to drill it out. I can’t use it as is and if it’s stuck and I break it so what. So on to the drilling portion of the job. I got a drill size just a shade bigger than my skinniest pin punch, 3/32 or so, diagonaled the center of the block, chucked it in the drill press and went to town. 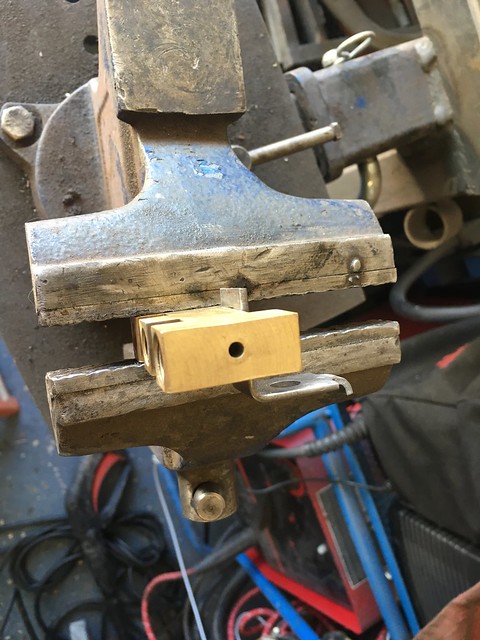 I give it a light but firm whack with the pin punch and a 16 oz ball peen dead blow. No move. Next a more decided whack with that same punch and a 24 oz straight ball peen. It took another almost robust shot to get the piston/pin out. It was cooked. The scars on the bottom of the piston are the punch marks from knocking it out. 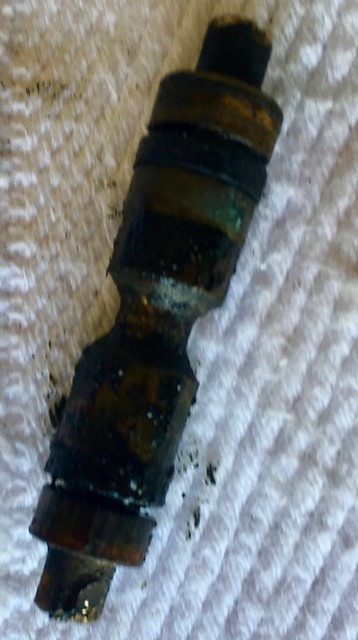 A rebuild kit from NPD with the screw in stud to hold it in place while bleeding and we’re good to go. Except for that hole in the end of the block.

In the thread where I got the drilling idea one of the suggestions was to use a plug and JB Weld. Like me that’s pretty shade tree but I wanted something a bit cleaner. So I decided to tig weld it. Not that I’d never welded brass but I’ve welded plenty of other metals. Like Liewellyn Moss, “tig, mig, stick, all of it…”

With some tips from Welding Web and Jody at Welding Tips and Tricks on You Tube I figured that I’d need to use either aluminum bronze or silicon bronze as the filler metal. Like AL it will be hard to heat at first but once it is it will flow like a demon. I did a test run at 80 amps on some flat steel stock and the filler. Seemed OK. I was using lanthanated tungsten, argon and AC voltage on the welder. An 80 amp pass wasn’t going to cut it. I tired a few more then pre heated the block for a few mins with a mapp gas torch. I then hit it with 150 amps and presto, it worked. It’s an ugly bead, that’s the nature of brass and it gasses off something fierce. But it works. 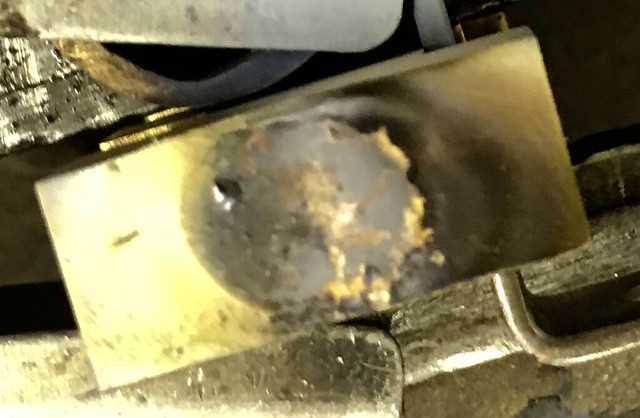 It will need some refinishing to bring it to a good look. I used 80 grit Roloc flap to knock the big chunks back and finished it with maroon Scotchbrite. 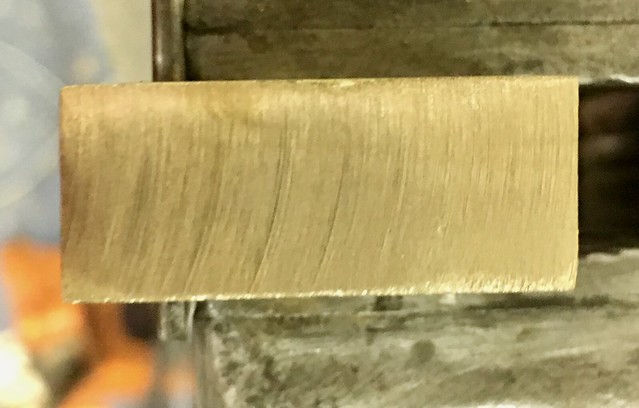 I’ve still got some cleanup to do in the block. There is a small nub that hangs down from the repair into the cavity. Probably won’t impact performance but I’ll grind it out with a ball cutting end mill then finish the cylinder cavity with 1000 grit around a drill almost the size of the bore. It will be like honing it. Between sticking the piston in there and the gassing out of the piece during the repair I’m sure it could use a good resurfacing.

If all goes well I should have a refurbished brake system on the car sometime Memorial Day.